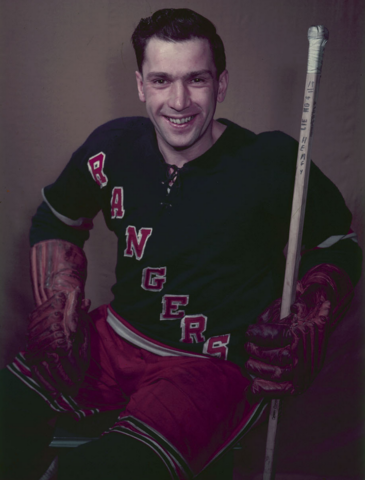 As a boy, Hergesheimer was coached by Bill and Bun Cook.

Hergesheimer played junior Hockey with the Winnipeg Rangers from 1943 to 1945, and joined the Winnipeg Monarchs for the Memorial Cup playoffs in 1945. Hergesheimer then played for the Brandon Elks from 1945 to 1947.

At the start of his pro career with the Minneapolis Millers in 1947, he stood 5' 8" and weighed only 145 pounds. He was also humourously known as "Fingers" because he'd lost his index and middle fingers up to the knuckles of his right hand in a punch-press accident in 1944.

Hergesheimer Played for 1 season with the San Francisco Shamrocks in 1948, then back to the
Minneapolis Millers in 1949, where he made the United States Hockey League First All-Star Team in 1950.

Hergesheimer then jumped to the American Hockey League Cleveland Barons in the 1950-51 season, and made the AHL Second All-Star Team.

A year in the AHL was very beneficial for Hergesheimer, who registered 83 points in 71 games and then set AHL records of 11 goals and five game-winners in 11 playoff games as he led the Barons to the 1951 Calder Cup championship. He also won AHL Rookie of the Year honors that season.

Hergesheimer`s first stint with the Rangers lasted five years from 1951 to 1956, and he was part of the team that ended a six-year playoff drought by qualifying for the postseason in 1956, and was the Rangers` best goal-scorer of the early 1950s, Wally Hergesheimer was an instant hit from the moment he arrived in New York in 1951, scoring 83 goals over his first three seasons to lead the team each year. He also had some tough times during that period, breaking his left leg twice during the 1954 calendar year, and he was limited to just 14 games in the 1954-55 season.

Traded away to Chicago following his lone playoff run with the Rangers, Hergesheimer returned to New York in 1958 by way of the minors once again. This time, the AHL Buffalo team for which he was starring was purchased by the Rangers organization, and his pro Hockey rights became Ranger property. That enabled him to play 22 more games with the team in 1958-59.

Hergesheimer then played three seasons respectively with Buffalo of the AHL plus Calgary and Los Angeles of the WHL.