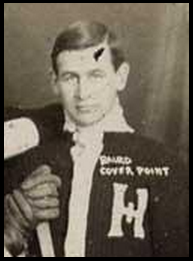 Baird was one of the first professionals in the sport of Ice Hockey.

Baird was noted as a strong body checker, the “Ottawa Citizen” reported following Galt‟s 1911 Stanley Cup match against the Senators that Baird “had a knack of throwing a man into the boards with surprising speed and suddenness.”