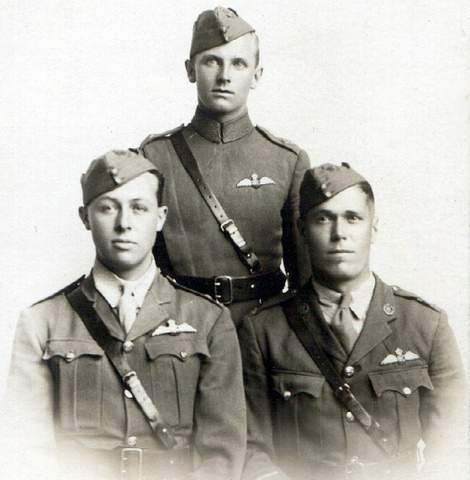 Konrad 'Konnie' Johannesson, John Davidson, Frank Fredrickson. They shared Icelandic heritage and an aptitude for Hockey. Konnie and Frank were stars of the Winnipeg Falcons Hockey team prior to the Great War. They enlisted March 1916, served in the Winnipeg-based 223rd Battalion and starred on the battalion's Hockey team. Overseas they transferred to the Royal Flying Corps. Konnie and Frank were both adept not just at flying WWI aircraft but also at teaching others to fly: pilot training was their key contribution to the war effort. Johannesson and Fredrickson were members of the Allan Cup-winning Falcons team of 1919-20 that went on to represent Canada -- and win the gold medal -- at the 1920 Olympics in Antwerp. Johannesson is honoured as a member of both the Canadian Hockey Hall of Fame and the Canadian Aviation Hall of Fame. Fredrickson was inducted in the Hockey Hall of Fame in 1958.