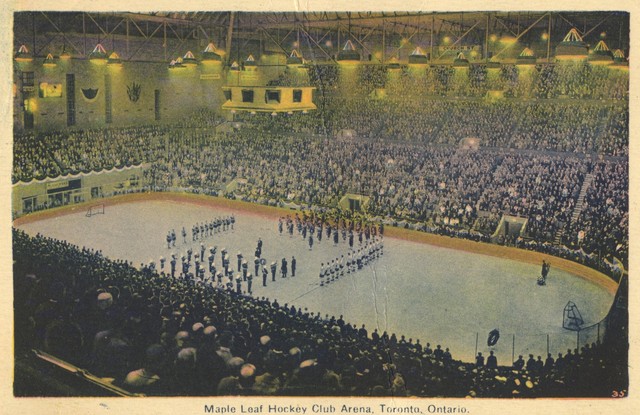 A later starting time was planned so that patrons had enough time to acquaint themselves with the seating plan. When the 48th Highlanders and Royal Grenadiers band played “Happy Days are Here Again” at 8:30 p.m., Smythe felt that “the scene was pretty much as I had imagined it in my rosiest dreams.” After the bands finished, Mayor William J. Stewart presented the team with floral horseshoes on behalf on the city. The dignitaries who followed bored sections of the crowd—the Telegram later admonished those fans for their rude behaviour in heckling Bickell and Ontario Premier George Henry, noting that “they made it pretty clear that they had come to see a Hockey game and didn’t care much about speeches.”

Mush March of the Black Hawks scored the first goal early in the first period. The Leafs tied the score late in the second period thanks to Charlie Conacher, but fell behind for good when Vic Ripley scored early in the third period. The Leafs outshot the Black Hawks but the sterling goaltending of Chuck Gardiner allowed Chicago to come out on top. Gardiner’s performance was remarkable given the game was stopped for fifteen minutes during the second period when Conacher collided with the goalie (during this time, NHL teams rarely carried a backup). Though Gardiner’s arm was severely injured, he made it back on the ice and was applauded by the crowd.

The Toronto Maple Leafs would lose 2–1 to the Chicago Black Hawks.

Reported attendance on opening night was 13,542

Despite the loss, the building was generally agreed to be a success. After a slow start and a coaching change, the Leafs also proved to be a success by the end of the 1931/32 season, when they brought the Stanley Cup to their new home.

Maple Leaf Gardens History
In early 1931, Maple Leaf Gardens Limited was established to raise funds for a new building. The first site considered was near the foot of Yonge Street, but the property was not for sale. The company then looked at land that had belonged to Knox College on Spadina Avenue north of College Street, but opposition from nearby residents spearheaded by future Toronto mayor Nathan Phillips scuttled those plans. Smythe then approached Eaton’s department store, which had just opened its College Street location and was open to drawing more customers from a nearby arena, even if its clientele might not be the type of people they hoped to attract to their frou-frou new store. Eaton’s initially offered Smythe the block north of Wood Street, but he insisted on land the company owned at the corner of Carlton and Church due to its direct access to streetcar service. Maple Leaf Gardens ended up with an option on the property, while Eaton’s received twenty-five thousand dollars worth of stock.

Beyond the clout of fellow Gardens directors such as mining executive J.P. Bickell with other businessmen, Smythe used all of his powers of persuasion to convince others to invest in the new arena.

Smythe, Bickell, and the other executives prodded local business titans to invest, despite questions about the timing of building a $1.5 million facility. As Elias Rogers Coal head Alf Rogers asked Bickell, “Don’t you know there’s a depression on?” (Rogers eventually bought twenty-five thousand dollars worth of stock). When construction bids were tendered, the Gardens found itself $250,000 short of financing the lowest offer. When Smythe came out of a meeting with the Gardens board and bankers indicating that they felt construction should be delayed for a year, Maple Leafs business manager Frank Selke ran down to an Allied Building Trades Council meeting on Church Street. Selke, who also served gratis as the business manager of an electrician’s union, proposed to the attending unions that any labourers who worked on the Gardens would receive 20% of their pay in Gardens stock instead of cash. Few objections were raised toward Selke’s scheme and he proceeded to sign agreements with twenty-four unions. When word of this plan reached Sir John Aird of the Bank of Commerce, he agreed to fund any lingering shortfalls. Workers who held onto their shares would have eventually made a nice little profit, as prices fluctuated from the fifty-cent range in the mid-1930s to the hundred dollar level by the end of World War II.

Construction began on June 1, 1931 and proceeded at a rapid pace. Haste was necessary, as the facility had to be ready for the Maple Leafs home opener on November 12. Over 1,200 labourers, 750,000 bricks, and 77,500 bags of concrete were required to build the Gardens. The cornerstone was laid by Ontario Lieutenant-Governor W.D. Ross in a dignitary-laden ceremony on September 21. “Toronto,” said Ross, “is, and has been for years, a sports centre. Our position on Lake Ontario, our National Exhibition, our general enthusiasm for sports of all kinds—amateur and professional—make this city the ‘logical location’ for a building worthy of our record, of current need and of our ambition.”