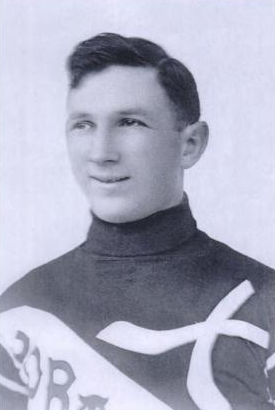 Muldoon played Hockey in the Ontario Hockey Association / OHA in the late 1800s and early 1900s before moving to Seattle, Washington and the Pacific Coast in order to pursue a boxing career. He changed his name to Pete Muldoon because the pursuit of a professional sports career was discouraged in Ontario at the time, and out of respect for his family, Treacy shed his given name and assumed the alias Pete Muldoon.

Muldoon won regional titles in both the middleweight and light heavyweight divisions while boxing.

Muldoon never boxed on a full-time basis, fight-game money insufficient for his financial needs. So near the end of his career, in 1912, Muldoon moved to Vancouver, Canada to train the Vancouver Lacrosse Club (lacrosse was a pro game in Canada at the time).

Muldoon was also hired by the Patrick brothers (Lester & Frank) to train and coach the New Westminster Royals, (a suburb of Vancouver) who in 1912 would be crowned the 1st Champions of the Pacific Coast Hockey Association, and awarded The Paterson Cup.

Muldoon also moonlighted as a boxing referee in his spare time.

The New Westminster Royals would only last 2 more seasons in the PCHA, as they had poor attendance at games, most likely because they shared the Denman Arena with The Vancouver Hockey Club (Millionaires).

The Royals would be moved to Portland, Oregon for the start of the 1914-15 PCHA season, and renamed The Portland Rosebuds. Pete Muldoon would be the 1st coach in Rosebuds history. The team would play .500 Hockey with 9 wins - 9 losses record.

Some articles have said that Pete Muldoon was the first coach to get a American team to the Stanley Cup finals, this is not true. Yes the Portland Rosebuds competed in the 1916 Stanley Cup final, but is was the team manager Edward Savage who would coach this team. Pete Muldoon had already left the Rosebuds to manage and coach the new Seattle Metropolitans team in the PCHA. Muldoon got his official release from the Rosebuds on October 15, 1915.

Once again Muldoon would coach his team, the Metropolitans to a .500 record with 9 wins - 9 losses, during the 1915-16 season. His old team the Rosebuds would win the PCHA championship, and play the Montreal Canadiens for the Stanley Cup championship.

The 1916-17 PCHA schedule was increased to 24 games for the regular season. Pete Muldoon's Metropolitans would dominate the season with 16 wins, 8 losses, 125 goals scored and only 80 goals scored against them.

The Seattle Metropolitans would play the NHA champion Montreal Canadiens for the Stanley Cup championship.

The games of the Final were played at the Seattle Ice Arena. Games one and three were played under PCHA seven-man rules; games two and four were played under NHA six-man rules. Bernie Morris scored 14 of Metropolitan's 23 total goals for the series, including six and the championship winner in their 9–1 victory in game four. The Metropolitans would become the 1st American team to win the Stanley Cup, and the first Seattle-based franchise to win a major pro title in any sport.

Pete Muldoon would become the 1st to coach a American team to a Stanley Cup championship, and, at age 30, the youngest coach of a Stanley Cup Championship team. Muldoon was also the manager and president of the Seattle Metropolitans.

Muldoon spent eight seasons coaching in Seattle, and amassed a record of 115 wins, 105 losses, and four ties. The Metropolitans played for the Stanley Cup three times under his leadership, and winning it once in 1917 during their first trip.

Muldoon is commonly listed as having coached the Mets for the duration of their existence (1915-24). In fact, he did not. A few months after the Stanley Cup clincher, Lester Patrick decided to fold his one-year-old Spokane franchise, the Canaries, who had moved to eastern Washington from Victoria following the 1915-16 season.

As co-owner of the PCHA, Patrick could work with any franchise he desired, and in 1917-18, he decided to become player-manager of the Metropolitans and send Muldoon back to his old job as coach of the Rosebuds.

Under Patrick, the Mets missed a chance for the Stanley Cup again when they lost a two-game playoff series with Vancouver.

For the 1918-19 season, Patrick removed himself from Seattle, joined the Victoria Aristocrats, and ordered Muldoon back to Seattle. By years end, Muldoon had the Mets playing for the Stanley Cup again, once more against Montreal. This series would be cancelled after 4 games played, as the Spanish influenza epidemic ravaged the Montreal Canadiens team.

The Metropolitans played for the Stanley Cup again in 1920, but lost to the Ottawa Senators.

The Seattle Metropolitans ceased operations along with the PCHA in the spring of 1924, and the Western Canada Hockey League / WCHL, featuring edition No. 2 of the Portland Rosebuds (the former Regina Capitals), came into existence. Muldoon became the coach - again.

But the WCHL did not last either, and Frank Patrick negotiated the sale of Muldoon and most of the Rosebuds players to a Chicago investor who was forming an expansion franchise (then called the Black Hawks, now the Blackhawks) in the National Hockey League, which had evolved out of the National Hockey Association following the 1917 season.

The investor, Major Frederic McLaughlin, also the club president, thought the Black Hawks should have won the leagues American Division in the team’s first year (1926-27), and blamed Muldoon for finishing third (19-22-3). Chicago’s third-place finish would have quickly faded into history, but instead evolved into a charming fable (Curse of Muldoon) that supposedly explained why the Black Hawks never finished first from 1927 until 1967, when the team finally won its first regular-season title.

Two weeks before the end of the 1926-27 season, Muldoon resigned, giving 14 days notice. He could not stand McLaughlins meddling.

“Our worthy president wanted to run the club, the players, the referees, etc.,” Muldoon said a few weeks after his departure. “He learned the game very quickly. In fact, after seeing his first game, he wrote me a letter telling me what players should and should not do.”

In 1928, after the city constructed a new ice palace (Civic Ice Arena), Muldoon, having returned to Seattle, rounded up several investors and established the Seattle Ice Skating and Hockey Association with the intent of forming a franchise to replace the Metropolitans, whose disbanding had left Seattle without Hockey for four years.

The new team they funded, the Seattle Eskimos, joined a new league, the Pacific Coast Hockey League, along with the Portland Buckaroos, Vancouver Lions and Victoria Cubs.

The Eskimos played through the 1930-31 season, at which point the PCHL folded due to dwindling attendance and rising costs.

In the spring of 1929, Muldoon went to Tacoma, Washington, USA with co-owner and local boxing promoter Nate Druxman to search for a location to build a new rink in order to establish a Hockey team. While in Tacoma, on March 13, 1929, while driving between potential sites, Muldoon, sitting in the front seat, suffered a massive heart attack. His companions rushed him to Pierce County Hospital, where physicians said his death was due to acute dilation of the heart. Only at the hospital did Druxman learn from Muldoons physician, Dr. W.A. Glasgow, that he had treated the former Hockey coach following a series of mild heart attacks.

After the 41-year-old Muldoons death, the Eskimos created an award in his honor: The Pete Muldoon Trophy. A replica went to the Seattle Hockey teams most inspirational player for many years. Sometime during the great depression, the original went missing.