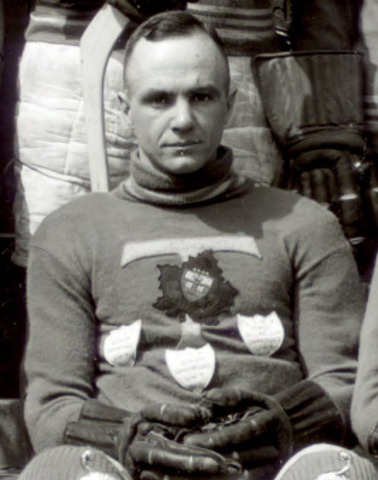 Ramsay was first noticed in 1915 while playing for the University of Toronto Junior Hockey Team that Had won the Junior O.H.A, Championship & the J. Ross Robertson Cup. A young Conn Smythe was captain of that team.

After the 1915 Hockey season, Ramsay, Smythe and all of his teammates enlisted in the army and airforce to fight in World War One. Ramsay served with the Royal Flying Corps in Italy.

In 1922-23 the coaching job was taken over by Ramsay who had the task of rebuilding the team. The season was one of the best in the history of Varsity.

Ramsay then joined the Toronto Granites for the 1923-24 season where he and the Granites represented Canada at the 1st Winter Olympic Ice Hockey games. The Granites / Team Canada would win the Gold Medal, and set Olympic Hockey records that will never be broken. Ramsay scored 10 goals and 6 assists in the Olympic tournament, including 3 goals vs the Czechoslovakia Team, 5 vs Sweden and 2 vs Switzerland.

After the Winter Olympic games, Ramsay coached 2 seasons for the Princeton University Tigers, who were Ivy League champions.

The Toronto Maple Leafs then signed Ramsay for 1 season 1927-28 in the NHL where he had 2 assists in 43 games played.

After playing in his only NHL season, Ramsay coached the Yorkton Terriers of the Saskatchewan league, then continued his coaching career with the Prince Albert Mintos from 1932-1934, and the Regina Aces from 1934-1936.