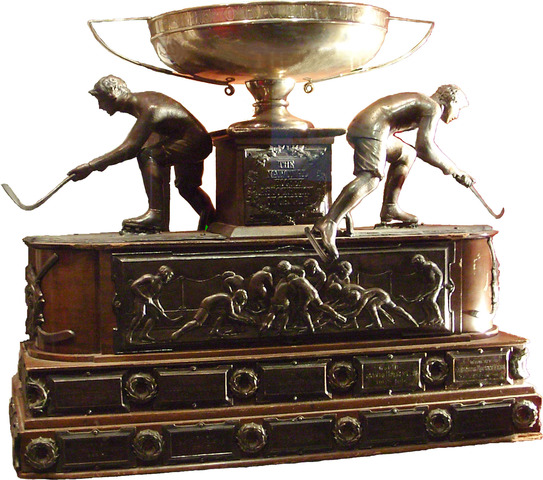 The National Hockey Association of Canada

On December 2, 1911, the NHA officially designated the trophy as the league's championship trophy

The Cup was fabricated using silver from an O'Brien mine.

J. Ambrose O'Brien had Hockey in his blood. He participated at all levels of the game - as a player, financier and founder. He almost single-handedly organized the National Hockey Association and helped launch one of the most famous teams in NHL history - the Montreal Canadiens.

When the NHA was suspended in 1917, the Cup was held by the Montreal Canadiens. It remained in their care until 1921. In November 1921, it was announced that the Cup would be given over to the National Hockey League to be awarded annually to the NHL champions. NHL president Frank Calder arranged with Ambrose O'Brien a new deed of gift. The Cup, which Calder had secured following the death of Montreal President George Kennedy, was then presented to the NHL champion Ottawa Senators. Upon the donation of the Prince of Wales Trophy to the NHL in the early 1920's, a decision was made by the league executive to retire the O'Brien Trophy. However in 1928, the O'Brien Trophy officially was awarded to the Canadian team with the most points. From 1928 onwards, one year after the NHL expanded to two divisions in 1926, the Cup was awarded to the winner of the Canadian Division, while the Prince of Wales Trophy was awarded to the winner of the American Division. It would be awarded under this definition until the end of the 1937–38 season.

The significance of the O'Brien Trophy was again altered in 1939, when it became the award handed out to the losing Stanley Cup finalist. Of note, the trophy was not formerly awarded between 1939 and 1943. It wasn't until 1944 that the teams from that five-year period had their names inscribed on the trophy. The O'Brien Trophy was officially retired by the NHL at the end of the 1949-50 season.

The Cup is now in the collection of the Hockey Hall of Fame in Toronto, Ontario and is on display with other historic trophies in the entrance to the Panasonic Hometown Hockey exhibit.