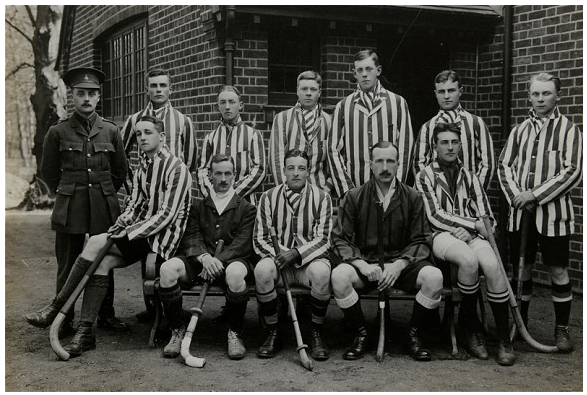 The team – and the referee, who was also cadet – includes two Welshmen, two Scots, and an Irishman, and there are also strong connections with the Empire. Two were born in India, one in Singapore, and another in Ceylon, now Sri Lanka. Three had a parent or other close relative who had served with the Indian Army.

Team Roster
Back row, from the left:

Referee, Isaac Usher, the Royal Irish Regiment
Although the referee, Usher was a cadet like the others. He grew up in Dundrum, Dublin, the son of a Protestant doctor who was well liked locally for the care he gave to Catholics. Dr Usher was killed in one of Ireland’s first road accidents soon after his son’s death, and a memorial erected in his name ironically became a focus for strife between the two religious groups. Usher started to study in Dublin, before going to Sandhurst. He died on July 4 1916 while leading an attack on a trench during the battle of the Somme. His body had to be left where it fell but was eventually recovered and buried. In 1920, it was exhumed and reburied. In the photograph's original caption, he is described as the "referee", rather than "umpire", the term usually applied in hockey.

Frank Layard, the Border Regiment
Born in Ceylon, now Sri Lanka, where his father was a tea planter. The family was originally from the Channel Islands. He won the Military Cross in April 1917, during fighting near Arras, after locating an enemy position and organising a machine gun attack on it. He died the following month, aged 20, but there was doubt cast on whether he had actually been killed. His family endured a period of anxiety about his fate, hoping to learn that he had been taken as a prisoner of war. His body was found and identified during the clearance of the battlefields in 1920.

Charles Cook, Duke of Cornwall’s Light Infantry
Born in Dunga Gali, in what was then the North West Frontier Province and is now Pakistan, where his father was a captain in the Indian Army. He was sent to Tonbridge School, where he was in a number of sports teams. During the war, he lost his leg, resulting in a medical discharge, although he did have another brief period of service in 1918 as an observer in a balloon with the Royal Flying Corps. In 1923, he married Mildred Jennings, the daughter of an MP, who had previously been married to George Leon, the heir to a baronetcy. Her grandson is the actor John Standing, Sir John Ronald Leon. After her death, in 1951, Cook married Doris Holdaway, who had been a servant for the couple. Cook died in 1981.

Thomas Wilmot, Worcestershire Regiment
The son of a vicar, he was educated at the Cathedral Schools in Worcester and Hereford. He first enlisted in the Royal Fusiliers, before being accepted at Sandhurst. He was awarded the Military Cross in July 1916 for repulsing German counter attacks on a captured trench, near Bethune. Days later, his unit was transferred to the Somme battle, which had just begun. He died in hospital on August 25, hours after being wounded in the stomach by a shell during an attack on German trenches at Delville Wood, on the Somme. Just before his death, he was able to ask a nurse to write to his mother, to let her know where he was and send his love. He was the first of three brothers to die during the war. The Imperial War Museum holds a collection of his letters, some of which mention his sport playing. In one, he describes how he met the two Sandhurst instructors, pictured with the hockey team. Both had travelled across to France while on leave from Sandhurst. He also describes how, a year before he was killed, he was incorrectly reported dead. Of the fighting, he tells his mother: “I can’t describe everything. You have got to see it to imagine it. Everything is so awful.”

Douglas Wimberley, Cameron Highlanders
Enjoyed the most illustrious career of all his team-mates, serving in both world wars, achieving the rank of major-general and playing a vital role in the victory of El Alamein. Born in Inverness to a military family, he was sent to Wellington College, traditionally seen as feeder school for Sandhurst. During the Battle of Cambrai, in 1917, he was wounded and won the Military Cross. In 1918 he was promoted acting and temporary major and dispatched to Russia, where the civil war was raging. He later served in Ireland during the Irish War of Independence, serving under Bernard Montgomery. He remained in the Army throughout the interwar years and in 1941 took command of the 51st (Highland) Division, where he appealed to the men’s Scottish patriotism, urging them to wear tartan as much as possible. He became known as Tartan Tam. The unit fought in north Africa – where Wimberley again served under Montgomery – and played an important role at El Alamein. He later led the division during the invasion of Sicily. He left the army in 1946 and became principal of University College, Dundee. He died in 1983.

James Fowlie, Highland Light Infantry
Born in Singapore, where his father, Dr Peter Fowlie, from Stornoway, in the Hebrides, was a senior in the government, as an elected Municipal Commissioner. Fowlie fought in the battle of the Somme and was promoted to lieutenant. He was serving as an intelligence officer when he was killed during the battle of Arras in the early hours of April 24 1917 – near to where Layard was to die, a few weeks later. Fowlie had been in an advanced position, sending back information about the course of the fighting by telephone, when his position was hit by a shell. His death was reported in the Singaporean and Scottish press.

Norman Kelley, Loyal North Lancashire Regiment
Kelley, the eldest of the group, born in Liversedge, West Yorks, 1894, the son of a carpet manufacturer. He went to Manchester Grammar and studied architecture before going to Sandhurst. He had perhaps the most unusual war career, spending only a month at the front in late 1915, during which he suffered an epileptic fit, fell over, and dislocated a shoulder. He spent the rest of the war under medical care and on half pay, until 1920, when he returned to serve with his regiment, for a month, in Guernsey. He was eventually discharged from the army in 1922 and died in 1940.

Front row, from the left:

Thomas Carlyle-Davies, the Welsh Regiment
The son of a banker, from Pembroke, west Wales, he was captain of his school rugby team. He began studies at Clare College, Cambridge University, before going to Sandhurst after the outbreak of the war. In September 1915, his unit was involved in the Battle of Loos. On October 1, an attack by his unit was thwarted when it ran out of bombs and became cut off. Carlyle-Davies was among the dead – the first from the hockey team to be killed. There were several varying accounts of his death by comrades and seven months later the War Office was still inquiring whether he was still with his unit. His body was never found and he was officially declared dead in 1920.

Captain and Adjutant N.A. Baillie-Hamilton, Black Watch
One of the company’s two instructors who played on the team. He served in the Boer War in 1901 as a second lieutenant. Along with the other instructor, Captain Priestman, he travelled to France during a period of leave in August 1915, to find out more about life on the front.

Ivor Cochrane, South Wales Borderers
The team captain. His father, a medical graduate, was born in India and his mother in London, Cochrane was raised in Glamorgan and sent to Wellington College. After passing out at Sandhurst, he served at Gallipoli, before being wounded and evacuated to Malta. Also saw service during the Salonika campaign, in the Balkans, where Allied forces had been sent, initially to support Serbia. He also served in France. After the war, Cochrane remained in the army and served in Egypt during the Second World War, before returning to the UK seriously injured. Although born and brought up in Wales, he was living in Weston-super-Mare at the time of his death in 1940, aged 44. He is buried in the village of Kewstoke, Somerset.

Captain J H Priestman, the Lincoln Regiment
The other instructor who played in the team. He was promoted to major in 1923 and served in Malta and Palestine in 1935-6.

Trevor Southgate, Essex Regiment
Born in Norwood, south London, he went to Felsted School, in Essex. His father was based in Rio de Janeiro during the war. Southgate spent the war attached, at different periods to the Machine Gun Corps, the Indian Army, and the Royal Flying Corps. In January 1917, he married Vera Murdoch, from Dovercourt. After the war, he worked in Nigeria for the United Africa Company, a trading firm.