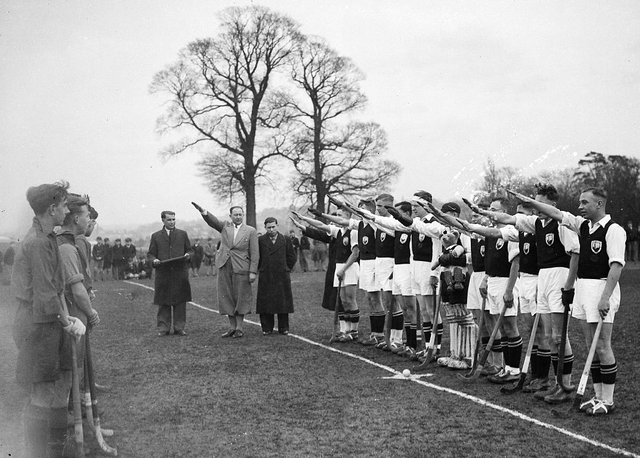 The moment a German team performed the Nazi salute as they faced English school boys in 1939. How many of these young men ended up trying to kill each other?

In six months’ time, the two groups of young men would be on opposing sides as the Second World War began.

But these English grammar school boys were given a chilling foretaste of Hitler’s sway over his people when, in March 1939, their German opponents in a Hockey match clicked to attention in unison and gave the Nazi salute while shouting ‘Heil Hitler’ three times.

This picture capturing the portentous scene before the start of play was found by former BBC newsreader Richard Whitmore during a trawl of archives in Hitchin, Hertfordshire.

The incident took place on the playing fields of Hitchin Boys’ Grammar School in a match between the school’s First XI and a touring German team of adults. The Germans won the match 4-1.

One Hitchin old boy, Bill Bowker, recalls that his father, grammar school master Freddie Bowker (pictured left of centre, holding a clipboard), said the display ‘shook the school team and staff to the core, confirming everyone’s worst fears about Hitler and the Nazis’.