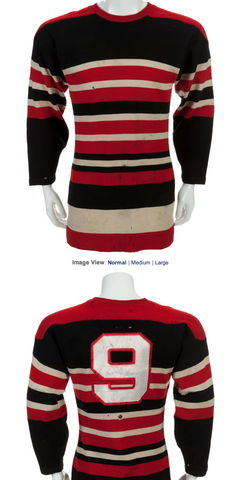 Used by a Chicago Blackhawks player during the mid to late 1940's. After use in the NHL it was sent down to the USHL Pla-Mors, but a faint outline where the Hawks' logo was once displayed, in addition to the proper "Wilson [size] 42" tag in the inner tail that matches known Blackhawks exemplars from the era point the origin of this shirt as being from the "Windy City" pro team.

Displaying the popular "Barber Pole" style, this striped wool sweater presents a two-color tackle twill sewn-on No. 9 on the back, and was either worn by George Gee or Roy Conacher, who played in Chicago from 1946-49. Multiple team repairs and a moderate amount of small holes are exhibited throughout.