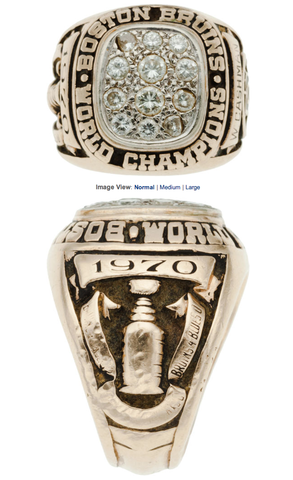 Here we present Mr. Cashman's personal Championship prize, a gorgeous fourteen karat gold ring studded with twelve diamonds on a face trumpeting the joyous words, "Boston Bruins World Champions." If you've encountered a slightly different style of this Championship jewelry in the past, there's a good reason for that. The ring was initially issued with large onyx on the face, inset with a single diamond, but this creation proved to be structurally unsound, cracking the stone. Cashman was one of several Bruins to take Balfour up on its offer to refashion the ring, replacing the onyx with the diamonds that now appear. We stress that the ring should still be considered 100% original, as it was the original manufacturer that instituted the necessary change. We report that three of the slightly smaller outer diamonds exhibit minor chipping, only apparent upon very close inspection.

Left shank features an image of Lord Stanley's cup in miniature, flanked by three banners reporting the results of the playoff series en route to the Championship. The Bruins logo appears at right, framed by "W. Cashman" and his number "12." The sharp detailing of the ring has been softened somewhat by years of proud wear on Cashman's finger, but it still presents wonderfully, losing none of its enormous historical appeal.