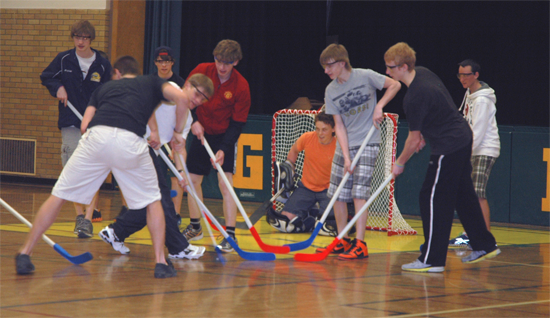 Players with the Giants senior boys hockey team and coach Jason Sloan, along with members of the South Grenville Rangers major midget team, were visited by players from the Bauer Select Latvia 96 team, who were in town to participate in the 2012 Leo Boivin Major Midget AA/AAA Showcase.

“For us it was a chance to gain exposure to the Latvian culture, and also the high level of hockey that they play,” said Sloan on Thursday.

The Latvian students also attended a class of their choice at South Grenville to get a taste of the Canadian education system and how it differs from its Latvian counterpart, which Sloan said starts to stream students much younger than in Canada.

During their stay here, the Latvian players also enjoyed an Ottawa Senators hockey game, and played an exhibition match against students at the Canadian International Hockey Academy in Rockland