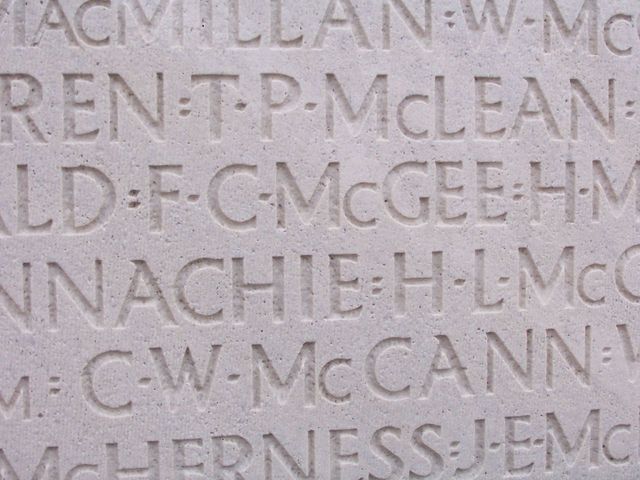 Francis Clarence McGee, (November 4, 1882 – September 16, 1916) was an Amateur Ice Hockey player during the early days of Ice Hockey for the Ottawa Hockey Club, nicknamed the Silver Seven - McGee enlisted in the military and fought in World War I for the 43rd Regiment (Duke of Cornwall’s Own Rifles) as a lieutenant in the 21st Infantry Battalion, starting in May 1915 despite being blind, or effectively blind in the left eye, the result of an old Hockey injury. McGee believed he had fooled the physician performing his medical examination at the time he enlisted. When asked to cover one eye, then the other during the vision examination, McGee pulled a fast one: rather than covering his good eye he switched hands, covering the same bad eye with his other hand. The likelihood is that McGee fooled no one: the army's medical form describes his vision as good in the right eye but nothing is shown for the left eye -- that section of the form is blank - In December 1915 McGee was wounded when his armoured car was demolished by a German high-explosive shell. McGee He was given the choice of a posting in Le Havre away from the action, but chose to return to his battalion at the front. He returned to the 21st Battalion in August 1916 for the Battle of Flers-Courcelette / Battle of the Somme. McGee was a motorcycle dispatch rider. That turned out to be a very dangerous job. McGee was killed in action 16 September. His body was not recovered and identified. He is remembered on Canada's great memorial at Vimy, one of 11,285 Canadians killed in France who have no known grave