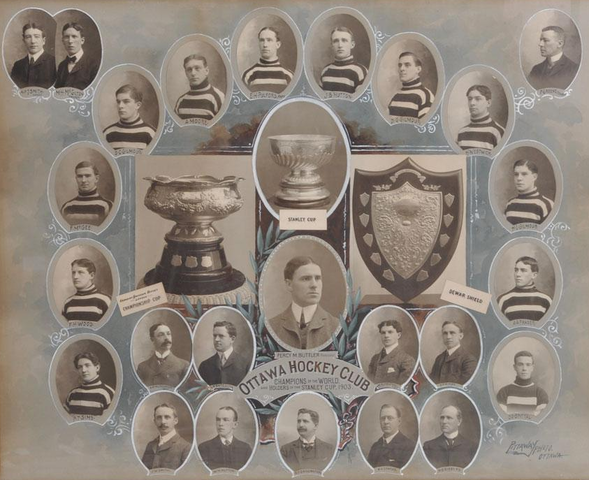 As the new CAHL and Stanley Cup champions, the Ottawas accepted a challenge from the Rat Portage Thistles of the Manitoba & Northwestern Hockey Association (MNWHA). Entering the best-of-three challenge series, the Thistles were younger and quicker than Ottawa; only one player on the Thistles was over the age of 20. However, poor soft ice conditions at Dey's Arena in Ottawa played a major factor as the Ottawa Hockey Club swept the series with scores of 6–2 and 4–2.

THIS SAME TEAM would defend the Stanley Cup 4 times in 1904. First against the Winnipeg Rowing Club, with the 1st game being played on December 30, 1903, with Ottawa winning over the Rowing Club 9 to 1. Game 2 was played on January 1, 1904, with the Winnipeg Rowing Club defeating Ottawa 6 to 2. The deciding game was played on January 4, 1904, with Ottawa winning 2 to 0. All 3 games were played at the new Aberdeen Pavilion in Ottawa. The Toronto Marlboros were the next challenger on February 23, 1904, with the Ottawa Hockey Club winning 6 to 3, and on February 25, 1904, with Ottawa again winning 11 to 2. The Montreal Wanderers challenged Ottawa on March 2, 1904 in a game played at Westmount Arena in Montreal. The game ened in a 5 to 5 tie, and then the Wanderers were disqualified for refusing to travel to Ottawa for the remaining 2 games. Finally the Brandon Wheat Cities from the Manitoba & Northwestern Hockey Association challenged Ottawa, with games being played on March 9, 1904, Ottawa wins 6 to 3 and on March 11, 1904, with Ottawa again defeating Brandon 9 to 3. Both games were played at the Aberdeen Pavilion in Ottawa.

NOTE: Cyclone Taylor Scratched his name with a pen knife onto the Stanley Cup bowl - Fred W Taylor over the engraving of: Ottawa 1904 Ottawa vs Wanderers.