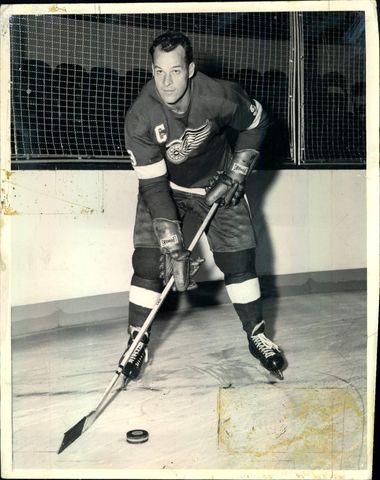 Gordie Howe - Gordon Howe - Mr Hockey - Gordon "Gordie" Howe, (born March 31, 1928) is a Canadian retired Professional Ice Hockey player who played for the Detroit Red Wings and Hartford Whalers of the National Hockey League (NHL), and the Houston Aeros and New England Whalers in the World Hockey Association (WHA). Howe is often referred to as Mr. Hockey, and is generally regarded as one of the greatest hockey players of all time.
Howe is most famous for his scoring prowess, physical strength, and career longevity. He is the only player to have competed in the NHL in five (1940s through 1980s) different decades. A four-time Stanley Cup champion with the Red Wings, he won six Hart Trophies as the league's most valuable player and six Art Ross Trophies as the leading scorer. He was the inaugural recipient of the NHL Lifetime Achievement Award in 2008.