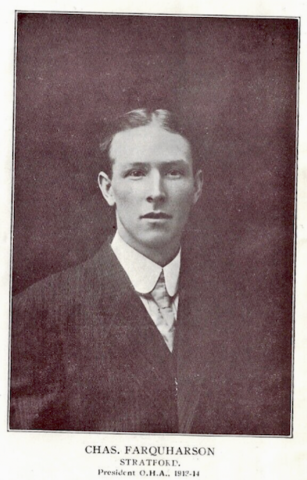 Farquharson was a leading sports figure on local Stratford lacrosse and Hockey teams.

Farquharson was a member of the 1901 intermediate championship lacrosse team.

Charles Farquharson was the Ontario Hockey Association / OHA President from 1913 to 1915.

Farquharson was involved in securing a franchise for Stratford in the Canadian Professional Hockey League / Can-Pro when it was organized in 1926. The Stratford Nationals won the Can-Pro championship in 1928.

NOTE
Farquharson spent his life in the furniture manufacturing business. He began as a bookkeeper with the Porteus-McLagan Company where he rose to the position of secretary-treasurer. Around 1913, he joined Frank Gifford, a furniture finisher from McLagan's and also a friend and neighbour, to form the Farquharson-Gifford Furniture Manufacturing Company in Stratford, Ontario.

His Straford home is now the Caversham House B&B