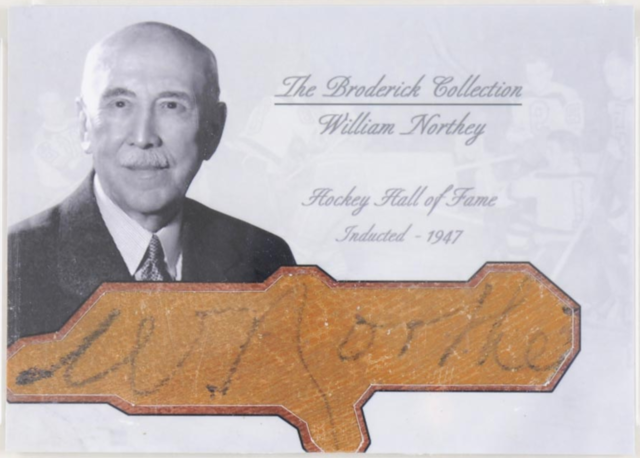 On the reverse of this card, it says;
The Broderick Collection
William Northey

William Northey played a vital role in a number of other sports throughout his life but it was Hockey which he truly dedicated himself to for over half a century.

He was an integral part of the formation of the Eastern Canada Amateur Hockey Association in 1906 and served as the league's secretary-treasurer. In 1908 three of the clubs turned professional. Sensing that amateur Hockey needed a positive reinforcement, Northey convinced his associate Sir Montagu Allan to donate a trophy for which the best senior amateur clubs in Canada would compete.

Northey also played a key role in the establishment of the Canadian Amateur Hockey Association in 1914. In 1920 he was elected as a director of the Montreal Athletic Association and moved to vice-president in 1922 and president in 1924.

With his natural gift of being a innovator, Northey was the main influence behind two significant rule changes. Firstly, he convinced the owners of the ECAHA clubs to adopt three periods in place of two halves. In 1911 he instigated the introduction of six-man Hockey as opposed to seven skaters.

When the International Hockey Hall of Fame was organized in 1944, Northey was appointed as honorary president.

William Northey was elected to the Hockey Hall of Fame in 1947.