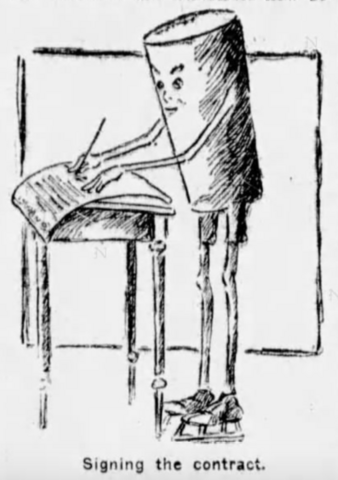 Caricature sketch of forward Frank "Pud" Glass (1884–1965) in the Dec. 31, 1910 issue of the Montreal Daily Star, depicting him signing a contract with the Montreal Wanderers prior to the 1910–11 National Hockey Association (NHA) season.

The text accompanying the sketch reads:

"It is now said there is not a vacant chair before the Wanderers' fireside, for every wanderer has returned to the family circle. There they all are, as proud of the uniform they wear and as zealous to add to its glory as any loyal band of hockeyists possibly could be. The last gap in the ranks was closed when Mr. "Pud" Glass put pen to contract. This is the sort of a Glass the Wanderers enjoy at the festive season, and it can never be said that they have a Glass too much. The future of the Wanderers now becomes transparent, and it can easily be seen that things are going to happen."