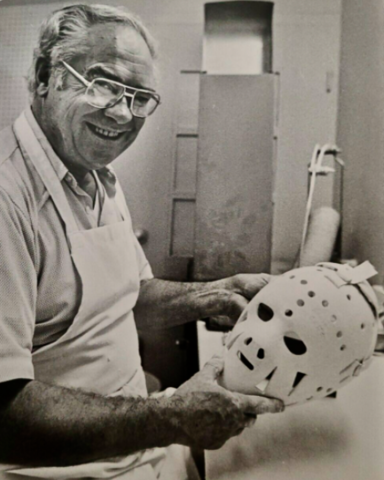 Ernie Higgins was a former plumbing superintendent that became a professional mask-maker at the age of 54, when he decided to leave his plumbing job. "I just decided I wanted to use my hobby (making molds and casts) as my business," he said.

Higgins 1st mask in 1962 was for his son Neil, who would later play goal for Boston College.

Higgins set up business in 1969 at his Norwood home in Massachusetts, moulding the fiberglass masks and helmets, along with other fiberglass protective equipment.

"The Man Behind the Masks" - a film by Jerry Kelleher
https://www.youtube.com/watch?v=JLtkdriOAFY