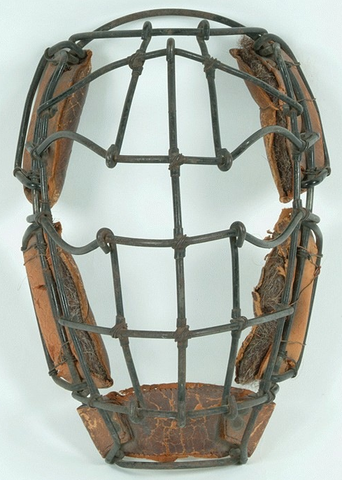 Deacon White Catcher's Mask - First Professional Catcher To Ever Wear a Mask - circa 1880.

This historically important catcher's mask was worn by Deacon White during the 1880s.
What makes this particular piece even more significant is the fact that not only was White the first professional catcher to use a mask, but he also improved on its design.

White recalls, first hand, how he was introduced to the new invention in a 1920s newspaper clipping:
One day during the season of 1875 at Boston, the papers announced that "The man with the iron mask would play a game of baseball for Harvard." Harry Wright asked me to go out with him and see the demonstration. A fellow named Fred Thayer, third baseman for Harvard, had made a big cage, much like a bird's cage, out of heavy iron wire. This the Harvard catcher, Jim Tyng, wore during the game. "What do you think of it?" Harry asked me. Well I told him such a mask hindered a catcher's work but I believe one could be made which would prove satisfactory. "Make one the way you think it should be made" he ordered. So I went to an iron worker in Boston and had him make me a mask out of steel wire. It fit over my face only, with padding around it, and was held on with elastic bands. This I used in catching Spalding for two seasons after that, and it came in handy when I went up behind the plate to catch my brother in 1878.

While we cannot state with certainty that the offered "spider-style" mask is the one referenced by White in the article, it may very well be and it is without question certainly one of the earliest examples in existence. Consisting of a network of strong metal wires, the mask features five separate pieces of leather padding, each affixed to the framework by its original metal fasteners. Three pieces of padding display additional reinforcement by means of vintage metal wire. No form of head strap is present. The mask displays heavy wear throughout, including numerous cracks and tears to each of the leather pads, but with no breaks to the framework. According to Watkins, this mask was found together with many other baseball items belonging to his grandfather: My great grandfather, James "Deacon" White, was a professional baseball player in the 19th century, playing for several teams in the 1860s-80s including the Cleveland Forest Citys, Boston Red Stockings, and Detroit Wolverines. Before she died, my grandmother, Grace White, brought a box full of Deacon's things to our house. We put the box in a closet where it remained unopened for many years. This spider style catcher's mask originates directly from Deacon White's personal collection. The level of use and provenance make it a virtual certainty that this mask was worn by White during his career. Although its exact years of use are unknown, it is also a virtual certainly that it dates prior to 1884, for it was in that year that White gave up his catching duties and moved to third base. Although he also saw action at a few other positions, there are no records of him appearing as a catcher in any official league games after 1884. He retired in 1890 at the age of forty-three. Considering that White stopped catching in 1884 and that the catcher's mask did not become popular until the 1880s, these facts all alone define this mask as one of the earliest known examples. The fact that a catcher's mask was an expensive and durable piece of equipment that was not often replaced suggests that this mask was probably used for many years, and may have even been the only mask used by White during his entire career. This mask is also one of only a few pieces of nineteenth-century baseball equipment that can be definitively attributed to a specific player. The fact that that player is Deacon White, the man who introduced the "iron mask" to professional baseball and was the first professional to ever wear a catcher's mask, makes this one of the most important of all nineteenth-century baseball equipment artifacts in existence.

Deacon White was one of the game's top players during the early years of professional baseball. Considered the finest bare-handed catcher of his day, he began his career as a member of Cleveland's entry in the National Association in 1871. In addition to his individual achievements, White is also remembered for his innovations with regard to the catching position. White was not only the first professional catcher to wear a mask, but also the first to wear a glove and the first to stand directly behind the batter with no one on base.