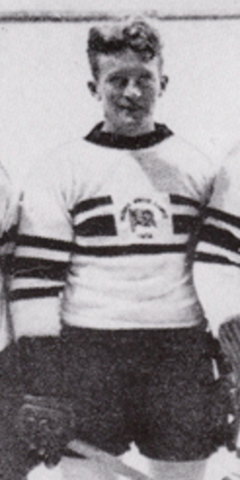 Stinchcombe went to Canada when he was six months old, learned much of his Hockey in Windsor, Ontario and later played Hockey at all levels in Ontario. After playing with Mic-Macs, the Ontario Hockey Association champion, Stinchcombe returned to England.

Despite losing the sight of one eye in a Hockey accident as a child, he enjoyed a long and successful playing career.

Stinchcombe's first appearance in British Hockey was playing for Streatham in 1935. In his rookie season, he was selected as an All-Star on the B team. The recognition was enough to earn him a spot on the national team for the 1936 Winter Olympics.

The British team was a prohibitive underdog at the Olympics, with Canada favoured to take gold in ice Hockey. However, behind the strong play of goalie Jimmy Foster and several other players with dual Canadian-British citizenship, Great Britain was able to win every game and capture its first (and only) Olympic gold in ice Hockey. At the Olympics, Stinchcombe played in six of the seven matches.

The tournament was also rated as World and European Ice hockey Championships for 1936.

After the Second World War, Stinchcombe played with the Wembley Lions and Wembley Monarchs. He was one of the first British Hockey players to score over one hundred goals in the post-War period.

Stinchcombe continued to represent Great Britain on the national team until 1948. As captain of the team, Stinchcombe led Great Britain to a respectable fifth-place finish at the 1948 Winter Olympics in St. Moritz.

After the 1948 Hockey season, Stinchcombe moved to the Midlands joining the Nottingham Panthers as coach, but continued to play when needed to in emergencies up until 1952. In all, he spent seven years with the team in the Lace City, steering them to their first English National Championship title in the 1950-51 and repeating the act in the 1953-54 season. On both occasions he was unlucky only to be voted as Coach to the All Star B-teams.

During his playing career, Stinchcombe was described as being a ‘rugged player with a powerful shot, who rarely got penalised.’ Through out his career, he was used as a specialist penalty killer and had the rare distinction to complete a full season without visiting the penalty box himself.

Archie Stinchcombe was inducted into the British Ice Hockey Hall of Fame in 1951.