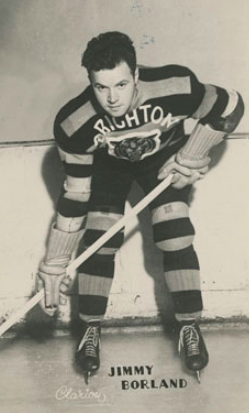 Borland emigrated to Canada with his parents while he was still a young man, and grew up at Lakeshore, Ontario, and Montreal, Québec.

Borland played for the Grosvenor House Canadians in England. where he helped the team to win the English League Division 1 in the 1933–34 season.

Borland was then selected for the Great Britain team at the 1934 World Championships. Borland scored two goals.

Borland then joined the Brighton Tigers for the 1935-36 season, becoming team captain.

Borland again played for the Great Britain National team, this time at the 1936 Winter Olympics. Borland played in three (maybe 5) games during the tournament, scoring one goal and helping the team to win the gold medal.

Borland returned to the Brighton Tigers for the 1936–37 season before retiring from Hockey because of a knee injury.

James Borland was inducted into the British Ice Hockey Hall of Fame in 1993.