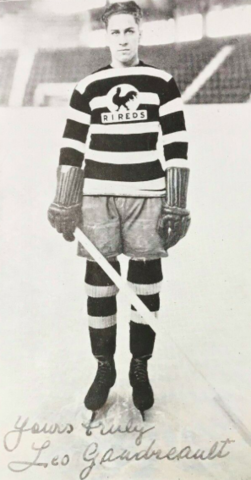 Gaudreault played his early Hockey with the Chicoutimi Bluets of the Quebec Provincial Hockey League/ QPHL from 1921 to 1923, and then joined the Quebec Sons of Ireland in the Eastern Canada Hockey League / ECHL for the 1923-24 season.

Gaudreault then went to Montreal and signed with the Montreal Nationale of the Montreal City Hockey League / MCHL, playing for them from 1924 to 1926, and split the 1926-27 season between the Nationale and the MCHL Montreal St. Francis Xavier Hockey team.

Playing all this Hockey in Montreal got Gaudreault noticed by the NHL Canadiens, and they signed him as a free agent October 7, 1927. Leo was put on a line with Pit Lepine and Wildor Larochelle, and scored 6 goals, 2 assists during his rookie NHL season.

Gaudreault started the 1928-29 season for the Canadiens, but after going scoreless in his first 11 games, Montreal traded him to the Providence Reds in the Can-Am league for Armand Mondou, December 19, 1928.

It took Gaudreault awhile to fit into the Reds team, but he would become a big part of the team, helping them win Henri Fontaine Trophy / Fontaine Cup championships as Can-Am champions in 1930, 1932 and 1934.

While he was playing for Providence, the Canadiens signed him as a free agent September, 1932, and he would play his final 24 NHL games before they traded him back to Providence with Armand Mondou for Hago Harrington and Leo Murray with both teams holding right of recall, January, 1933.

Gaudreault would later finish his Hockey career with the Minneapolis Millers of the American Hockey association / AHA during the 1936-37 season.