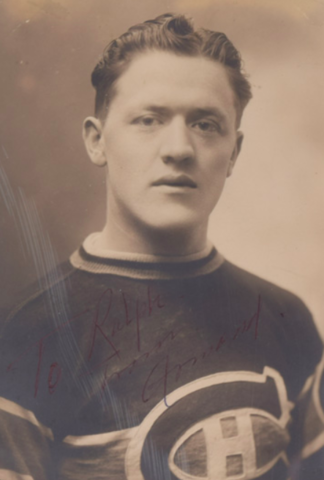 His farming family moved to Montreal when he was young. After making his Hockey debut under the direction of the brothers of the Académie St-François-Xavier where he was a star playing both in the centre and defence positions.

Mondou would play the 1925-26 season with the Montreal Nationale, in a league financed by the different banks of the city of Montreal. Once again, Mondou would be one of the players to watch, and he earned him the attention of Léo Dandurand , the leader of the Montreal Canadiens, who offered him a contract with Canadiens affiliate team in the Canadian-American Hockey League / Can-Am, the Providence Reds. It is said that Mondou was so impressed by the Canadien's attention that he did not even bother to look at the contract and signed the contract.

It was during his 2 plus years with the Providence Reds that under the recommendations of coach Jimmy Gardner that Mondou developed something he introduced in some way into professional Hockey without too often being credited: the throw-knock.

When the coach noticed that Mondou had a tendency to leave the puck free in front of him when he used his speed to cross the puck. He then advised him to hit the puck hard against the goalkeeper. When he tried it in practice, he scared his own goalkeeper enough that he tried it successfully in a match.

The Canadiens sent Leo Gaudreault to the Providence Reds on December 19, 1928, so they could call up Mondou to the NHL, and was put on a line with Wildor Larochelle and Pit Lépine, a trio that would be used mainly in defensive play. Mondou scored only 3 goals in his rookie season, but did help the Canadiens win the 1929 O'Brien Trophy, as NHL Canadian Division champions during the regular season.

The next season, Mondou became known as a gritty left winger for the Canadiens and just staying within the rules of the game. He scored just 3 goals again in the regular season, but it was his play during the playoffs in which the Canadiens had a huge upset over a talent-laden Boston Bruins in which Mondou's defence was a key factor. The Bruins' 38-5-1 record translates into a .875 points percentage, still the best in NHL history. The team did not lose back-to-back games all season until being swept by the Canadiens in the best-of-3 Stanley Cup Final. The Canadiens, who had lost all four of their regular-season meetings with the Bruins, were led by captain Sylvio Mantha, who tallied a goal in both Final series games. The Canadiens' series-clinching win in Game 2 prompted the first Stanley Cup presentation to the club on Forum ice. In eliminating the Black Hawks, Rangers and Bruins, the Canadiens had not lost a single game in the postseason. Mondou scored 1 goal, 1 assist in the 6 playoff games.

The next season, Mondou and the Canadiens would win the 1931 O'Brien Trophy, as NHL Canadian Division Champions and would also the 1931 Stanley Cup championship.

During his early years with the Canadiens, Mondou was learning the Slap Shot from fellow teammate Nick Wasnie, and today he known as one of the first players to use the Slap Shot in Hockey history.

The Canadiens would win the O'Brien Trophy again in 1932, with Mondou having his best season to date, scoring 6 goals, 12 assists during the season.

In the first game of the 1934-35 season against the Toronto Maple Leafs, Armand Mondou had the 1st NHL Penalty Shot on November 10, 1934 vs goalie George Hainsworth. Hainsworth made the save. (The penalty shot was much different then today, as the player had to shoot from a stationary position, about 35 feet from the goalie)

Through the remainder of the decade, Mondou helped the Canadiens reach the post-season most years. He often formed a hard-working line with Leroy Goldsworthy and George Mantha. Mondou set a career high with 9 goals, 15 assists in the 1934-35 season.

The Canadiens won the 1937 O'Brien Trophy.

In the 1937-38 season, Mondou broke his leg in a collision with Boston's Eddie Shore. While he did return to play for the Canadiens, he just wasn't the same, and finished his career playing for both Montreal and the New Haven Eagles (IHL), retiring in 1940.

Mondou also played in the 3rd NHL All-Star Game on October 25, 1939, as it was organized as a fundraiser for Babe Siebert's family, as Babe had drowned on August 25, 1939.

Mondou was also rarely penalized in his career, accumulating only 118 minutes in the penalty box over 386 regular season games.