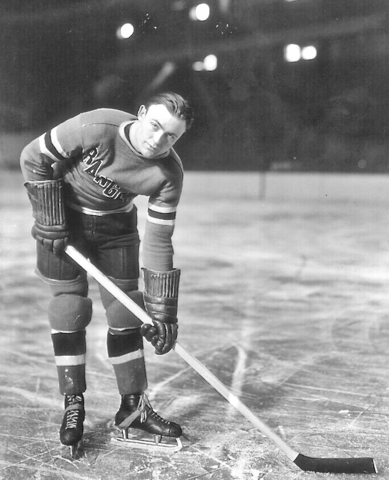 Murdoch was raised in Alberta, and would later play for the Western Junior Hockey League University of Manitoba Bisons from 1921 to 1924. Murdoch was captain of the Bisons when they won the 1923 Abbott Cup and the 1923 Memorial Cup championship. Murdoch scored a incredible 26 goals in 8 playoff games during the championship run, which caught the eye of Conn Smythe, who watched the championship games at the Arena Gardens in Toronto.

When Conn Smythe was assembling the first ever New York Ranger team to begin with the 1926-27 season, he signed Murray Murdoch as one of his original New York Rangers, offering him a signing bonus of $1500 and a salary of $5000 to start.

Lester Patrick took over the Rangers before their first game ever played, and placed Murdoch on a checking line with Billy Boyd and Paul Thompson to start his NHL career.

Murdoch helped New York to the 1928 Stanley Cup championship in just his and the team’s second season in the NHL, and Murdoch was fifth on the team in scoring behind Frank Boucher, Bun Cook, Bill Cook and Ching Johnson.

In 1932, Murdoch and the Rangers appeared in the Stanley Cup finals again, this time against the Toronto Maple Leafs. Unfortunately, New York came up on the losing end. During the regular season, they finished first in the American Division and second overall in the NHL.

The following year, Murdoch and the Rangers won their second Stanley Cup championship in 1933. It was a rematch of the year before in the finals with New York taking out the Maple Leafs, three games to one. The final three games were played in Toronto at Maple Leafs Gardens. This version of the Rangers was an underdog, finishing third in the four team American Division.

The Rangers once again competed for the Stanley Cup championship in Murdoch's final year in the NHL, 1936-37. As underdogs, again, they defeated the Maple Leafs, then the Montreal Maroons, but lost to the Detroit Red Wings in the 5 game series - Murdoch had 1 assist in the final 5 games.

Murdoch joined the IAHL Philadelphia Ramblers as an assistant coach and team captain for his final Hockey season in 1937-38.

Murray Murdoch was the NHL’s first ironman - from the start of his career, the first ever game played by the Rangers, until his final game, New York’s final game of the 1936-37 season (Stanley Cup final), Murdoch did not miss a single game. Murdoch appeared in 508 consecutive regular season NHL games (11 seasons), scoring 84 goals, 108 assists and played in 55 playoff games, scoring 9 goals, 12 assists.

The Rangers honored Murdoch at Madison Square Gardens when he passed 400 games played. The New York Yankees Lou Gehrig, sports' most famous iron man, presented Murdoch with a plaque for the occasion.

After Murdoch retired as coach, he served seven years as an athletics administrator at Yale.

Three of Murdoch's Yale skaters - Fred Pearson and Terry Van Ingen in 1948 and Jack Morrison in 1968 - became Olympians. None of his players reached the NHL., but three became owners: Northrup Knox, co-founder of the Buffalo Sabres; Bruce Norris of the Detroit Red Wings; and Gordon Ritz, an original partner of the Minnesota North Stars.

In 1974 Murdoch was awarded the Lester Patrick Trophy for outstanding service to the game in the United States.

John Murray Murdoch is a "Honoured Member" of the Manitoba Hockey Hall of Fame, inducted in 1985.