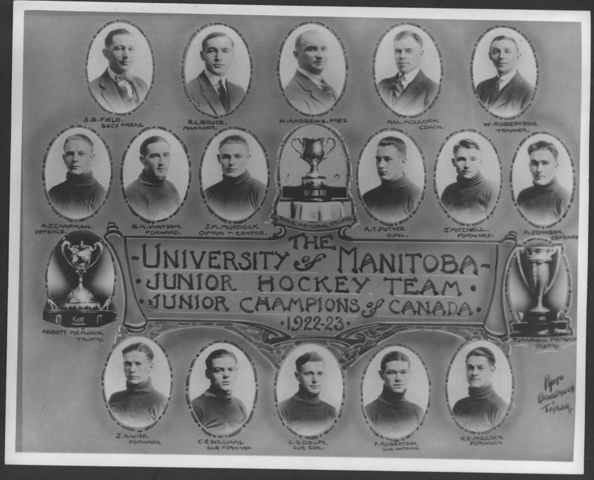 In a two-game, total goal series, held at the Arena Gardens in Toronto, Ontario, the University of Manitoba won their 1st Memorial Cup, defeating Kitchener 14 goals to 6.

The Memorial Cup opened in Toronto on March 22 with Manitoba, showing what was called "superior speed, and courage, uncanny checking and resourcefulness,” whipping Kitchener 7-3 in Game 1. The referee was Lionel Conacher. The teams were tied 2-2 after one period, but the varsity boys banged in five straight goals in the second period to put it away.
Murdoch scored four straight second-period goals for Manitoba, with singles coming from Blake Watson, Nip Johnson and Jack Mitchell. Babe Siebert, Maurice Schnarr and W. Schnarr replied for Kitchener.
Four nights later, Manitoba wrapped up the Memorial Cup with a second consecutive 7-3 victory that gave it the round by a 14-6 aggregate. Murdoch's last goal in the first game, with 2:30 left in the second period, was the Cup-winning score.

Murdoch followed up his four-goal opening game by scoring five times and setting up another in Game 2. All told, he scored nine of Manitoba's 14 goals in the two games.