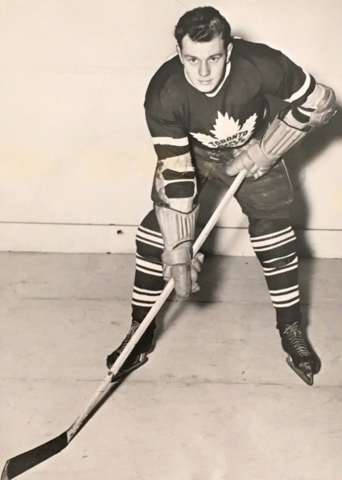 Poile played junior Hockey for the Fort William Rangers from 1940 to 1942, and was leading the Thunder Bay League in scoring when the Toronto Maple Leafs signed him to a professional contract in November 1942.

Poile served in the Second World War, and played for the Toronto RCAF and the Toronto Bowsers in 1943-44.

Poile returned to the Maple Leafs in 1946, playing in 9 games, scoring 1 goal and 8 assists, and was a member of the Maple Leafs Stanley Cup-winning team of 1947, scoring 2 goals in the playoffs.

Early the next season, Poile and the rest of the "Flying Forts" line, along with Bob Goldham and Enrie Dickens were traded to the Chicago Black Hawks for superstar Max Bentley.

A year later he was dealt to the Detroit Red Wings, where he represented them in the 1948 NHL All-Star game.. Before the 1949–50 season he was acquired by the New York Rangers and was traded mid-season to the Boston Bruins, which would be his final stop in the NHL.

Poile would spend five more years playing in minor professional leagues as a player-coach, first for the Tulsa Oilers of the United States Hockey League in 1950–51. he then rejoined the Red Wings organization in 1951–52 as player coach of the Red Wings' Maritime Major Hockey League affiliate, the Glace Bay Miners.

Poile moved up to the Red Wings' Western Hockey League affiliate, the Edmonton Flyers, in 1952–53. He retired as a player in 1954, but would continue to coach the Flyers until 1962. With the Flyers, Poile would win 3 Lester Patrick Cups as Western Hockey League champions in 1953, 1955 and 1962, and was named executive-of-the-year by The Hockey News in 1953.

Poile then became head coach of the San Francisco Seals from 1962 to 1966, winning the Lester Patrick Cup as Western Hockey League champions in 1963.

With the NHL expansion in 1967, Poile became general manager of the Philadelphia Flyers, acquiring key members of the team (Bobby Clarke & Bernie Parent) that would win the Stanley Cup in the 1970s.

In 1970, Poile became general manager of another NHL expansion team, the Vancouver Canucks, building that club until leaving in 1973 to join the World Hockey Association as executive vice-president. He left the WHA in May 1976.

In August 1976, Poile became president of the Central Hockey League. During the 1983–84 season he also became commissioner of the International Hockey League. The CHL wound down its operations at the end of that season, and Poile continued in his role with the IHL until retiring in 1989.

That same year (1989) he was presented the Lester Patrick Trophy in recognition of the model work he had done in establishing the IHL as a solid breeding ground for NHL talent. When he left the IHL, seven of the ten teams were the top affiliates of an NHL club.

Bud Poile was inducted into the Hockey Hall of Fame as a builder in 1990.

His son, David Poile, has also had a long management career in the National Hockey League and was the first (and current) general manager of the Nashville Predators.

Poile has had two professional Hockey trophies named after him. The first was the N.R. "Bud" Poile Trophy of the International Hockey League, awarded from 1989 to 2001 to the most valuable player of the Turner Cup Playoffs. The second is the Norman R. "Bud" Poile Trophy of the American Hockey League, awarded to the team that finishes the regular season with the best record in the Western Conference.