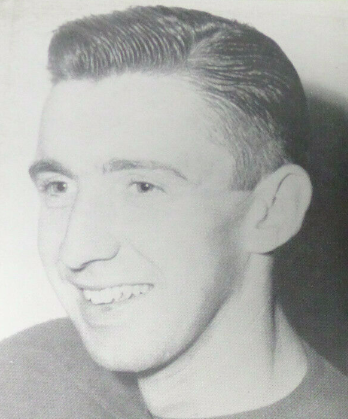 McNab then played part of the 1945-46 season for the Regina Capitals in the Western Canada Senior Hockey League / WCSHL.

The Detroit Red Wings owned the rights to McNab, and sent him to their minor league affiliate, the Omaha Knights in the United States Hockey League / USHL, where he played most of the 1946-47 season. He also played 6 games for the American Hockey League / AHL Indianapolis Capitols and 3 games for the IHL Detroit Metal Moldings team during the season. McNab helped the Knights reach the 1947 USHL championship final, losing to Kansas City.

McNab had a outstanding 1947-48 season in Omaha, scoring 44 goals, 32 assists in just 44 regular season games, which got him a call up the the NHL by Detroit, scoring 2 goals, a assists in 12 games.

McNab was now with the Red Wings full time to start the 1948-49 season, scoring 10 goals, 13 assists in 51 regular season games, and 1 goal in the playoffs, helping Detroit reach the 1949 Stanley Cup final. McNab played 65 games for Detroit during the 1949-50 season, but only scored 4 goals, 4 assists. He didn't have a point in 10 playoffs games, but played solid, as the Red Wings won the 1950 Stanley Cup championship.

McNab was demoted to the minors the following year. Although he had a good comeback season with the AHL's Indianapolis Capitals in 1950-51, he was forced to sit out the entire 1951-52 season recovering from back surgery.

McNab was able to rebound from his back injuries, but was never again able to raise his game to the NHL level. He played the last seven years of his career with the New Westminster Royals of the Western Hockey League / WHL and helped coach the club for part of 1952-53. At age 30, McNab proved he still was a quality Hockey player, winning the 1955 WHL Leader Cup, as league MVP, on the strength of 32 goals and a 81-point season in 70 games.

In 1961, McNab became general manager and coach of the San Francisco Seals of the WHL. He was then coach of the WHL's Vancouver Canucks and in 1966 was hired as coach and general manager of the San Diego Gulls. He rose in the front office to vice-president by 1971. In 1974 he was named president of the Central Hockey League. Although he would only remain with the CHL for a year, as near the end of 1975, he joined the NHL as general manager of the Washington Capitals, succeeding Milt Schmidt. McNab remained in that job until 1982. Under his watch, the team drafted players such as Rick Green, Ryan Walter, Mike Gartner, and Bobby Carpenter.

Midway through the 1983–84 season, McNab joined the New Jersey Devils as vice-president and general manager. He would remain their general manager until 1987, and then retired from the team and hockey in the 1990s. During his tenure as Devils' GM, players such as Chris Terreri, Kirk Muller, Sean Burke, and Eric Weinrich would be drafted.

The Max McNab Trophy was presented to the MVP of the Adams Cup playoffs in the Central Hockey League / CHL.

McNab was recognized for his contribution to ice Hockey in the United States by the NHL and USA Hockey as co-recipient of the Lester Patrick Trophy in 1998.

McNab Regional Park in Watson, Saskatchewan is named in honour of the McNab family.