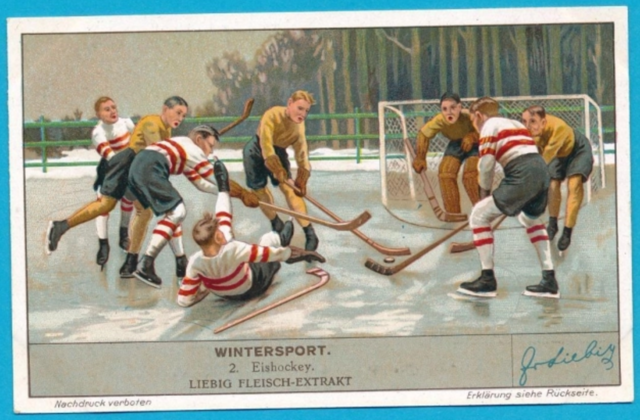 These trade cards were produced by a German company, Liebig. It is apparently a multi-sport set featuring winter sports, as stated on the front.

The set includes a Hockey card, entitled Eishockey. The cards have a white border with a colorful lithograph presented on the fronts. The back of this particular card includes a description of hockey. The Hockey card features a game between two unnamed teams. While being played outdoors, the game is still a formal one of sorts as the two teams are wearing uniforms and not casual clothing.

The exact date of the cards is unknown but they are believed to be from the 1930s.

Liebig produced all sorts of other trade cards. Most were of the non-sports variety, but a few other issues included sports (mostly winter-weather sports) such as skiing and Hockey.