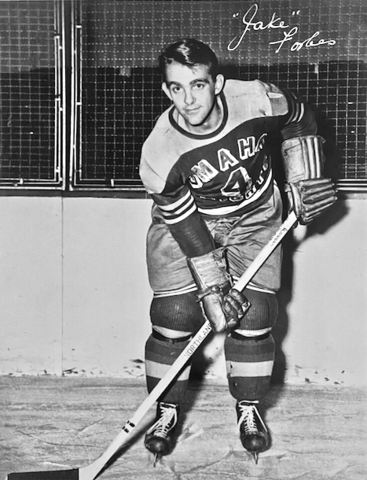 Jake Forbes was Inducted into the Omaha Hockey Hall of Fame on October 10, 2001.

Forbes played 376 games, more than any other Omaha Knight in the team's history in regular season play from 1945-51. As an all-star defenseman and team captain, he was a teammate of some of the greatest Hockey legends of all-time, such as Gordie Howe, Terry Sawchuk and Marcel Pronovost.

After his Omaha career, he also was a player-coach in St. Louis and Sherbrooke before he returned to Omaha. He spent many years as a linesman in the International and Central Hockey Leagues and was a co-founder of youth Hockey in Omaha.

Among Jake's many playing accomplishments was scoring the longest goal ever in professional Hockey with a goalie in the nets. It happened on February 8, 1949, in Omaha. Jake cleared the puck from deep in his own zone, banked the disc off the side boards and watched it slide under the stick of Kansas City goaltender Al Rollins. After the game, Jake and his teammates measured the distance at 215 feet. He also scored a goal as a defenseman and then filled in as a goalie because of an injury in the same game.

The Jake Forbes Defenseman of the Year Award is named after the former Omaha Knights defenseman who played in more games than any other Knight, and who finished his career second in franchise history in assists and fourth in points.