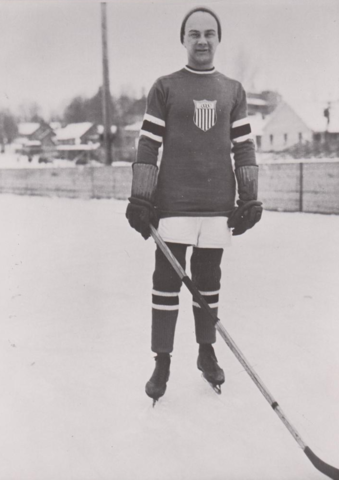 Palmer was selected to represent his country on the 1932 U.S. Olympic hockey team. One of those try-outs was a benefit game against the Boston Bruins, played at the Boston Garden on Jan 22, 1932, to help cover the costs of the United States team. The game was played the night before the team was to leave for Lake Placid. The Bruins team was a mix of regulars and minor league Boston Cubs (CAHL) players. Eddie Shore was one of the Bruins regulars who played in the game. Art Chapman scored four of the five goals in a 5-1 Bruins win. The Boston Globe recap of this exhibition game said that “Ding Palmer showed a lot of flash and gave the Bruins outer defence quite a bit to do.” The same article also stated, “the amateurs left an impression that the shield of these United States is to be worn by a group of right smart Hockey players in the coming international competition.”

The U.S. Hockey team was set to play their first game of the 1932 Lake Placid Olympic games on February 4 against a very powerful Canadian team - The Winnipegs. With the U.S. playing a quick aggressive game and leading 1-0 in the third period, both Palmer and Jack Garrison, with about two minutes go, took penalties. With both players off the ice, Canadian Harold Simpson tied the game. In overtime, Victor Lindquist scored giving the Canadians a 2-1 victory. The next day the U.S. took on Poland, with goals by ex-Yale players John Bent and John Cookman, who scored twice, the U.S. came away with a 4-1 win. The February 7 game against Germany was an easy 7-0 win that saw the U.S. dominating while keeping the Germans from barely getting any shots from within the blue line. Ding Palmer starred in this game, scoring three goals and an assist. On February 8, the U.S. once again took on Poland, Palmer scored two more goals in a 4-0 U.S. win. The German game on February 10 was much the same as the first meeting between these two teams, this time it was an 8-0 U.S. win that saw Palmer score two more goals and add another assist. On February 13, the United States faced Canada in the second-round robin game between the two teams, a game the U.S. needed to win in order to force a playoff game that would decide the gold medal. 2:17 into the first period, Ding Palmer, after having dove into a corner for the puck, passed out to Douglas Everett who put the puck into the Canadian net. At the 9:47 mark of the first period Canadian Hack Simpson made a move that got U.S. goalie Franklin Farrell out of position, scored to tie the game at one each. In the second it was Ding Palmer who scored at 13:38 from a rebound of a John Bent shot to put the U.S. ahead 2-1. The score remained that way up until the 14:10 mark of the third period when Canada’s Romeo Rivers scored, tying the game at two. After three scoreless ten-minute overtime periods were played the game ended in a tie and Canada, finishing with 11 points to the U.S.’s 9 points, was awarded the gold medal with the United States earning the silver medal and Germany taking the bronze. Palmer scored eight goals and added three assists for 11 points with 2 PIM. His eight goals led all players, the 11 points tied him with Canada’s Walter Monson for the lead in the tournament.

Palmer was also a member of the Massachusetts Rangers (Boston Olympics), the United States team that won the 1933 World Ice Hockey Championships in Prague, defeating Canada 2-1 in the final epic game. Palmer scored 9 goals and collected two assists for 11 points to lead the U.S. team.

Palmer was selected to play for the United States at the 1936 Olympic games but, because of business interests, decided not to play.