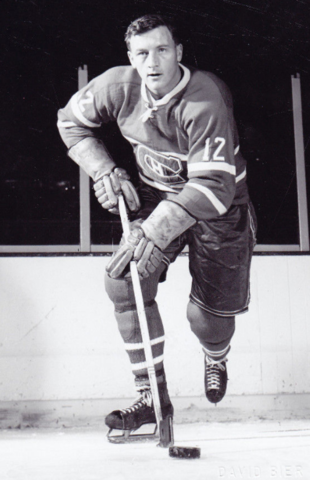 Moore played a partial season with the Montreal Junior Royals in 1947-48, but became a full-time member the following year. In 1948-49, with Dickie's offensive prowess more than evident, the Royals went on to become the first Memorial Cup champions from Quebec. "We eliminated the Barrie Flyers, we beat Halifax then and we beat the favoured Brandon Wheat Kings," Dickie recalls. While playing with the Royals, Moore attracted NHL attention. "Jo Jo Graboski came by. He was a scout for the Toronto Maple Leafs. He said, 'Are you interested in joining us?' I said, 'Sure.' He said, 'We'll get in touch with you.' Frankie Orlando was looking through the bus window and knew Graboski. He went to Frank Selke and said, 'Watch out! The Maple Leafs are after Dickie!' I was working at the CPR at the time and Selke called me up and said, 'Can I see you?' I said, 'I can't get away from work.' I had a feeling why he wanted to see me and I was waiting for the Maple Leafs to call me." Nonetheless, the Canadiens registered Dickie Moore as their property.

The next season, the NHL's Montreal Canadiens stacked their Junior Canadiens' club, with Moore moved from the Junior Royals to the Junior Canadiens. For a second straight season, Dickie collected better than a point per game, and for a second consecutive season, he was part of a Memorial Cup championship. "It was a great league. A lot of fun; a lot of challenges," smiles Moore.

The parent Montreal Canadiens summoned Dickie to join them during the 1951-52 season. "I joined the Canadiens at Christmas in '51. I joined a great line — 'Rocket' Richard and Elmer Lach." Dickie contributed 18 goals and 33 points in less than half a season in his debut NHL campaign. "I stayed there (with Richard and Lach) for awhile and then Elmer retired and Jackie Leclair centred the 'Rocket' and me and after that, the 'Pocket' (Henri Richard) came along. I played nine seasons with the Pocket and the Rocket."

Dickie retired and ran his burgeoning business while his former teammates skated through the 1963-64 campaign. But a crafty Punch Imlach, general manager of the Toronto Maple Leafs, gambled on Moore and claimed him in the 1964 Intra-League Draft. "When Punch Imlach drafted me, the Canadiens got mad at me, thinking I had orchestrated it. I was hurt (at the suggestion). They asked me to reconsider, but I told them, 'No. You let me go. I told you I still wanted to play Hockey.' I got a call from King Clancy (of the Maple Leafs) who told me I'd been claimed by the Maple Leafs and asked me if I'd consider playing. I said, 'Sure, I'll consider,' and I asked to meet Punch. I had called some friends to find out about Punch Imlach. I called Jean Beliveau and I called Bert Olmstead and they gave me the lowdown. They told me he was a great person and a great coach. Let me tell you something, I never met a nicer person."

Away from the rink and busy overseeing his rental business between 1965 and '67, Dickie was shocked to be summoned back to the National Hockey League in December 1967. "I was playing with the Oldtimers in Montreal once a week," he starts. "During that time, I got a call from Cliff Fletcher, who was working with Scotty Bowman in St. Louis. I knew Cliff from the Montreal days. He said, 'Scotty wants to know if you'd make a comeback.' I said, 'I don't know, Cliff. I got my business going.' But I went around to some of my customers and they said, 'Dickie, we'll support you 100%. Go and play Hockey.' I had so much support from my customers to make a comeback."

Moore worked hard to attempt a comeback with the expansion St. Louis Blues. "I lost twenty pounds to make the comeback, practicing by myself. I picked up a youngster to act as a goaltender. I did a lot of skating and decided to go play with them." The team was littered with former Canadiens, including Red Berenson, Jean-Guy Talbot and Jimmy Roberts. Scotty Bowman was behind the bench. "My first game was in Los Angeles. I flew from Montreal to Los Angeles. I had my winter coat on when I arrived at the hotel," Dickie laughs.