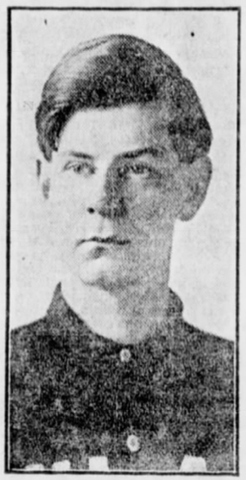 Del Irvine was a defenseman, born in Barrie, Ontario on November 24, 1892. He played with the Winnipeg Monarchs from 1912–1915, winning the 1915 Allan Cup, before he joined the Portland Rosebuds of the Pacific Coast Hockey Association (PCHA) for the 1915–16 season.

With the Rosebuds Del Irvine appeared in the 1916 Stanley Cup finals against the Montreal Canadiens of the National Hockey Association (NHA), a 5 games series the Rosebuds lost 2 games to 3.

Del Irvine died of pneumonia in Chicago on April 13, 1916, 23 years old, while traveling east with the Portland Rosebuds. Portland Rosebuds team manager Edward Savage was with him at the time of his death. Some people suspected Irvine's death was caused by him inhaling ammonium chloride fumes while playing on artificial rinks all winter in the United States.

Sourced from The Winnipeg Tribune, Nov. 9, 1915. Credited to Unknown.