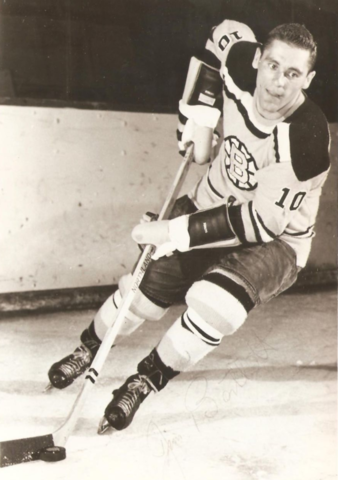 Bartlett's career was mainly played in the American Hockey League / AHL for the Baltimore Clippers and Providence Reds, over twenty years. He spent three years with the Boston Bruins and one with the New York Rangers, playing a total of 191 games in the NHL, scoring 34 goals and 57 points.

Close to the end of his professional Hockey career, Bartlett kept his skills sharp by playing with the National Brewers, a Baltimore area amateur team that was sponsored by the National Brewing Company and National Bohemian. He returned to the pro level to score 8 goals in 11 games for the Baltimore Clippers during the end of the 1971-72 season, and then played another full 72-game season with Clippers in 1972-73.

In 1974, Bartlett brought his professional Hockey career to a close and then enjoyed four more seasons of amateur Hockey in the Baltimore-Washington area with the Brewers. During the five seasons that Bartlett played with the Brewers, he worked as a driver for the National Brewing Company in Baltimore.

Bartlett would one day go on to work as a chauffeur for none other than New York Yankee's owner George Steinbrenner.

Bartlett thanks his Hockey career for landing him the driving job, a position he held for 20 years.

"When he found out I used to be a Hockey player, that's when one thing led to another."

Bartlett became Steinbrenner's unofficial hockey tutor when his company bought into the New Jersey Devils. Bartlett had to explain the game to him.

"He'd take me up to the box with him. I had to show him everything. Why did the whistle blow when the puck went across the red line. That's a two-line pass. What about when the whistle blew when it was touched up. That's icing. When he has other people in his box, he'll say to them, `Anything you want to know about the game, just ask Jimmy."