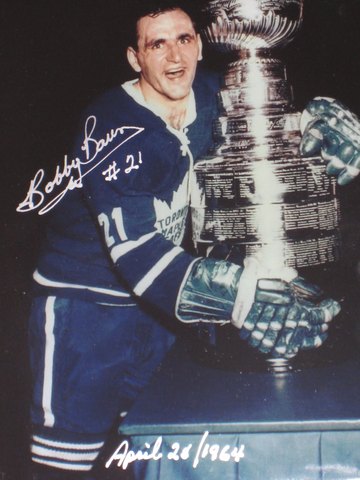 Baun played junior hockey with the Toronto Marlboros of the Ontario Hockey Association from 1952 to 1956, winning the Memorial Cup in 1955 and 1956. After turning professional, Baun played most of the 1956–57 season with the Rochester Americans, the Toronto Maple Leafs affiliate in the American Hockey League. They would be the only minor league games Baun would ever play. He was called up to the Leafs during the season and played in Toronto for the next 11 seasons, winning the Stanley Cup in 1962, 1963, 1964, and 1967.

Baun was one of the hardest and cleanest hitters of his time. He was not considered an offensive threat as a defenceman, never scoring more than 20 points in a season in the NHL. His highest single-season goal total was eight in 1959–60. However, Baun is remembered for his performance in game six of the 1963–64 NHL season Stanley Cup finals against the Detroit Red Wings. On April 23, 1964, having fractured his ankle earlier in the game, he returned in overtime and scored the game-winning goal. The Leafs won the next game 4–0 to win the best of seven series, and secure their third consecutive Stanley Cup championship.

He developed a reputation for understanding the business side of playing in the NHL in the years before there was a players' union. Eventually, other players sought Baun's advice about their contracts and salaries, which eroded his relationship with Leafs' general manager Punch Imlach. That relationship deteriorated even further when Baun was a holdout for the 1965–66 season. Baun eventually got a raise, but Imlach never forgot it.

Baun remained with the Leafs through their final championship in 1967, but by then he was having some differences with boss Punch Imlach. Imlach used Baun sparingly in the Cup finals. Sadly, the too-proud Baun opted not to take part in post-championship parades and parties because he felt he did not contribute anything to that championship.

Imlach allowed Baun to be exposed on the 1967 expansion draft list. The Oakland Seals quickly grabbed Baun’s playing rights and made him the first captain in team history. But Baun was unhappy in Oakland, and after one season he asked to be traded back to one of the Original Six teams. He and Ron Harris headed to the Detroit Red Wings for the 1968-69 season in exchange for Gary Jarrett, Doug Roberts, Howie Young and Chris Worthy.

Baun played in Detroit for two years but early into the 1970–71 season he found himself at odds with coach Ned Harkness and was placed on waivers. From there, he was claimed by the Buffalo Sabres, managed by Imlach, who immediately traded him to the St. Louis Blues. Baun refused to report to St. Louis and nine days later was traded back to the Maple Leafs for Brit Selby.

Though in the twilight of his career, Baun continued to be a steadying influence on the Maple Leafs defense for parts of three seasons. Unfortunately he suffered a career ending neck injury early in the 1972-73 season, after a hit from Mickey Redmond that ended his NHL career at the age of 36.

Baun retired as a player and ran a cattle farm, a 250-acre operation near Claremont, Ont., that in the early ’70s grew to 2,000 acres with leased land and was the home for 600 head of cattle, he was also a Tim Hortons franchisee times three - He even loaned Horton $10,000 to get it off the ground, but three years later, he was hired as head coach of the Toronto Toros of the World Hockey Association. Mike Nykoluk, another member of the Marlboros in the mid-1950s, had been the team's first choice, but he turned the job down. Playing for the Toros were three of Baun's former Leaf teammates: Frank Mahovlich, Paul Henderson, and Jim Dorey, as well as future NHL star Mark Napier and Vaclav Nedomansky. But the Toros under Baun had a disastrous year, finishing the 1975–76 season with the worst record in the league. The Toros even finished 11 points behind the Minnesota Fighting Saints—a team that had folded with 21 games left to play in the season. Baun was replaced as coach after the season. He returned to farming and also sold insurance after his retirement from Hockey.

In the 1980s, Baun organized an NHL alumni association and began an investigation into the NHL's pension plan. The plan had been touted to players as the best in professional sports, but after playing in 17 NHL seasons, Baun's pension was only $7,622 a year. Baun received little support from other players, and eventually gave up. Problems with the pension plan were later uncovered through an audit backed by Carl Brewer.

Bobby Baun was inducted into the Ontario Sports Hall of Fame in 2010.