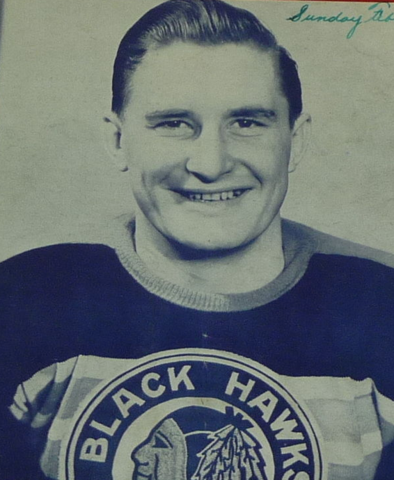 At the age of 16, young John Chad joined the Prince Albert St. Marks of the Saskatchewan Amateur Hockey Association where he developed his Hockey skills for two years. In 1937-38, Chad played six games for the Saskatoon Chiefs, scoring eleven goals and 19 points. In six playoff games he tallied ten goals and 14 points.

In 1938-39, Chad was a member of the Edmonton Athletic Club. Once again his scoring prowess shone brightly through, tallying 15 goals, 15 assists and 30 points, all league bests for that year in the EJHL. His scoring touch remained in tact throughout the playoffs, where he scored 26 goals and 41 points in just 14 games.

Chad's incredible offensive talents certainly did not go unnoticed by teams in the NHL. He signed a free-agent contract with the Chicago Black Hawks on October 18, 1939, and suited up for 22 games for them that year, scoring eight goals and eleven points. He also managed to play 31 games the Providence Reds of the IAHL, collecting 22 points in 31 contests.

The 1940-41 season saw Chad dress for 45 games with the Black Hawks. He scored seven goals and 25 points, tying Cully Dalstrom for fourth in team scoring. Despite his success in Chicago, Chad headed back to Canada where he played with the Regina Rangers of the Saskatchewan Senior Hockey League in 1941-42. Two of the next three years were spent with the Calgary RCAF, with a year playing for the Calgary Combines sandwiched in between.

The 1945-46 season was unique for Chad, in that he played part of the year in Britain with the Wembley Lions before returning to North America where he played his final 13 NHL games, once again in a Chicago Blackhawks uniform. However, it was obvious his offensive skills were not able to thrive with the likes of established star players such as Max Bentley and Bill Mosienko handling the bulk of the offensive workload. He played a total of 80 NHL games over three years, scoring 15 goals and 37 points.

Chad's NHL days were behind him, but he continued to play pro Hockey for another seven years, five with the Providence Reds and two with the Saskatoon Quakers, where he retired after the 1952-53 season. In five of those seven years he managed to surpass the 30-goal plateau, proving that he still had his touch around the net.