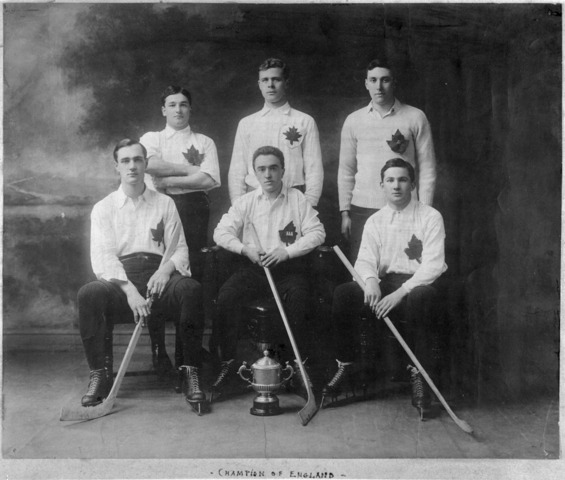 ON January 10, 1910, wearing white shirts emblazoned with a red maple leaf, the first Hockey club representing Canada to do so, the Oxford Canadians stepped on to the outdoor rink at the Swiss resort of Les Avants to play the host nation at the first European Championships. In doing so they became the first team to represent Canada on the international stage.

The club were the English champions in 1907 and 1910, and subsequently participated in the 1910 European Championships when the President of the Swiss League sent them an invitation to take part, which they accepted. They played three games, which were not considered to be part of the official competition, and beat Switzerland 8–1, Germany 4–0 and Belgium 6–0. They did not play Princes Ice Hockey Club, who were representing Great Britain in the tournament. Great Britain won the tournament, but the Oxford Canadians were accepted as European Champions owing to their success in the competition.

“We resolved to call ourselves the Oxford Canadian Team. There were a number of young English ladies at our hotel and they very kindly helped us to make up our costumes, which consisted of blue ‘shorts’ and a white sweater with a maple leaf on the breast . I remember the main difficulty was to get a good design of a maple leaf as there was not even a picture of one in the village"

The club became affiliated to the International Ice Hockey Federation in 1911. They were named English champions again in 1911, and participated in the 1912 LIHG Championships, which were unofficially considered to be "World Championships". The Oxford Canadians were the only "non-European" participants in the tournament, in which they finished second behind Berliner Schlittschuhclub, who were representing Germany in the competition. The club were the English champions for the fourth and final time in 1913. Ice Hockey was suspended in the United Kingdom following the outbreak of the First World War in 1914. When the sport resumed again in 1920, the Rhodes Scholars were allowed to participate in varsity matches again, and the Oxford Canadians ceased to compete, merging to make a "combined" university side.

The Oxford Canadians were re-established in 2014, one hundred years since they last played in 1914, once again from primarily Canadian student hockey players attending Oxford University.

A number of Hockey players that represented the Oxford Canadians were killed in action in World War I, including Capt. John B Mitchell MC KIA, The Somme, 16 September 1916.