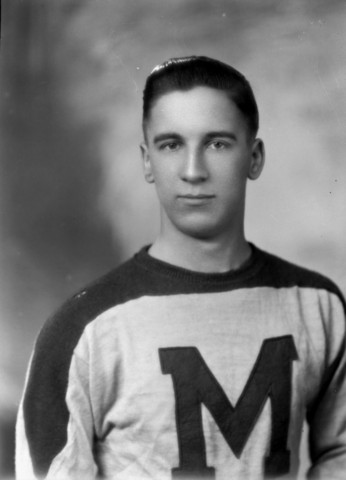 Before Lindsay became "Terrible Ted" in the National Hockey League / NHL, he was a star player on the St. Michael`s College Hockey Team during the 1943-44 season, playing 22 regular season games, and scoring 22 goals, 7 assists and 24 minutes in penalties. In the 1944 playoffs, Lindsay scored 13 goals and 6 assists in 12 games, with 16 minutes in penalties.

1944 continued be be a stellar year, as Lindsay's performance in the Ontario Hockey Association Junior A League (now the Ontario Hockey League) earned him an invitation to try out with the Detroit Red Wings of the NHL and he made his big league debut in 1944 at the age of 19, and played 45 regular season games, scoring 17 goals, 6 assists and 43 minutes in penalties. during the 1945 Stanley Cup playoffs, Lindsay scored 2 goals and had 6 minutes in penalties in 14 games.

Lindsay would play 17 years in the NHL.