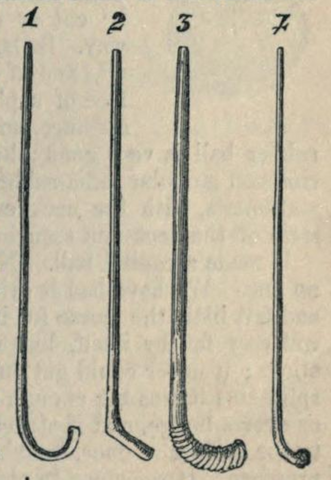 In all general principles, Hockey bears a great resemblance to foot-ball, the game consisting of driving a ball through a goal. The ball, however, is of much smaller dimensions, even where a ball, and not a bung, is used; and it is impelled, not by foot, but by certain sticks, or clubs, called Hockeys, or Hookeys, because the end with which the ball is struck is more or less hooked.

The shape and demensions of the Hockey-stick are entirely arbitrary, being left to the peculiar taste of the owners. Some like their Hockeys to be sharply hooked, while others prefer them merely bent over at the end. Some players like a very thick, heavy stick, which can be put down in front of the ball in order to neutralize the blows of the opposite side, while others can play best with a slight and springy weapon, that can be used with one hand, and is employed to tap the ball away just as an opponent is about to strike, and to coax it, as it were, towards the goal through a mass of adverse sticks.

The four sticks shown in the engraving are very good samples of the forms best adapted for use.

Fig. 1 is much in favour of with some players, and is therefore given ; but for our own part we never could play to our satisfaction with it, the large and deep curve deceiving the eye and causing the player to let the ball pass through the hook, besides running the risk of entanglement in the opponent's stick.

Fig. 2 is usually a favourite, but the angle of the head with the handle is arranged according to the fancy of the player. Some like the head to be made of horn, backed with lead like a golf-stick ; but this formation is hardly necessary, costing a rather large sum, and not conveying correspondent advantages.

Fig. 3 is a queer and eccentric form, which is not suitable to every player on account of its weight and generally large proportions. We have, however, seen it employed with extraordinary effect by a player who was accustomed to drive his opponents into a state of considerable excitement by his faculty of stopping the ball with this over grown weapon, and then planting it so firmly that all opposing sticks could not get at the ball in spite of their battering. In this way he would save many a game that had well-nigh been given up as hopeless, and by thus checking the ball on its way to the goal, would give time for his own side to come up and turn the tables. The great hooked end of this club was bound with very strong iron wire.

The same player was equally successful with a stick the exact reverse of the preceding, and represented as Fig. 4. This was a very slight ashen stick, with a small, but rather heavy head, so that when shaken it would bend and spring like a whalebone. This little stick was used for darting among the struggles and clatter of contending weapons, and giving the ball just a wee pat then and now at critical moments, so as to edge it a little nearer the goal, and at the same time to knock it away just as the blow of the opponent descended.

This image and text came from the book - Every Boy's Book
George Routledge & Sons, London and New York 1869. The 1st edition of the book was first published 12 years before the publication of this updated version.

It also says the illustrations are by William Harvey and Harrison Weir ; and the credit for the able manner in which they have been engraved is due to the brothers Dalziel. 2, Farringdon Street , February, 1856