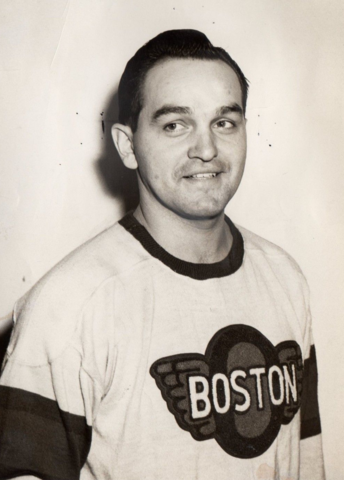 Left-winger Marcel Fillion played one game for the Boston Bruins in 1944-45. Other than his big league cameo, he was a prolific goal scorer in junior, senior and the minor leagues.

The native of Thetford Mines, Quebec, starred for the Shawinigan Cataracts and Quebec Sea Gulls over the period 1940-43. After not taking part in the 1943-44 season, Fillion scored 78 points in 46 games for the Boston Olympics of the Eastern League. He dressed once for Boston but otherwise was a stalwart in the Eastern and Quebec senior leagues.

Fillion was an integral component of the Boston Olympics' EHL championships in 1945 and 1947. He later played two years for the Sherbrooke Saints of the QSHL then retired in 1951. After sitting out one season he returned to play two years with the senior Rimouski Renards before hanging up his skates for good.

The Fillions were indeed a Hockey family.