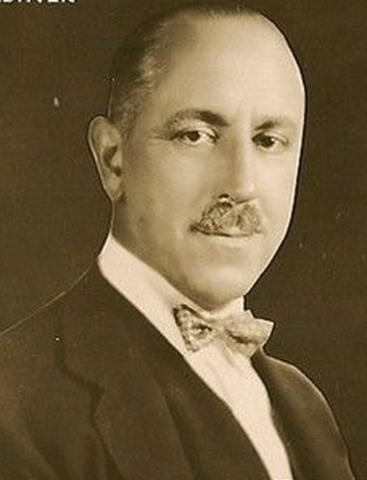 The native of the Windy City, he was the son of a prosperous coffee merchant. McLaughlin graduated from Harvard in 1901 and took over the family business when he father passed away four years later.

On May 15, 1926, the NHL granted an expansion franchise to former football star Huntington Hardwick and his syndicate of investors. Hardwick and a group of Boston investors was awarded a professional ice Hockey franchise for Chicago from the National Hockey League (NHL), but sold the franchise (which became the Chicago Black Hawks) a month later.

On June 1, McLaughlin, who had no experience in the ice Hockey business, purchased the Chicago expansion franchise from Hardwick. He named the team the Black Hawks after the nickname of his army unit, the 86th Infantry Division / "Black Hawk Division", where he had served in the 333rd Machine Gun Battalion. Most of the Hawks players were from the Portland Rosebuds of the Western Hockey League purchased from WHL owner Frank Patrick for $100,000.

The Chicago Black Hawks came into being with Major McLaughlin serving as the team's first president.

The public response was tepid at first as games were played in the cramped Chicago Coliseum. As fan and stockholder interest dwindled, McLaughlin gradually took over blocks of shares until he had a large majority.

The team's fortunes improved briefly when the Chicago Stadium was opened in December 1929 and attendance soared. By the early 1930s the Great Depression took its toll and McLaughlin kept his dream alive by securing a loan from Montreal's Joe Cattarinich.

At the time McLaughlin acquired the Black Hawks, he was married to Irene Castle, a famous dancer and film actress. She is credited with creating the "Indian head" design of the first Black Hawks sweater. McLaughlin was a "hands on" owner and he made 13 coaching changes in 18 years. One Hawk coach was Godfrey Matheson, who got the job when he met McLaughlin on the train and impressed McLaughlin with his Hockey knowledge. Matheson lost the job after two games.

McLaughlin was fiercely patriotic, and at various times during his ownership would try to fill his roster with as many Americans as possible, during a time when very few American-born players played in the NHL. McLaughlin declared that the 1936-37 edition of the Hawks would consists solely of America players. The idea drew attention to the team but did not translate into success on the ice. The 1938 Stanley Cup win was done with eight Americans on the roster and Bostonian Bill Stewart was coach. Stewart was fired early the next season.

As an owner, McLaughlin also feuded with other owners. James Norris, the Detroit owner, set up a competing Chicago team in the American Hockey Association, locking the Hawks out of the Chicago Stadium. The Norris family would eventually purchase the Hawks after McLaughlin's death.

During his 18 years as owner, McLaughlin would lead the franchise to two Stanley Cup wins, in 1934 and 1938.