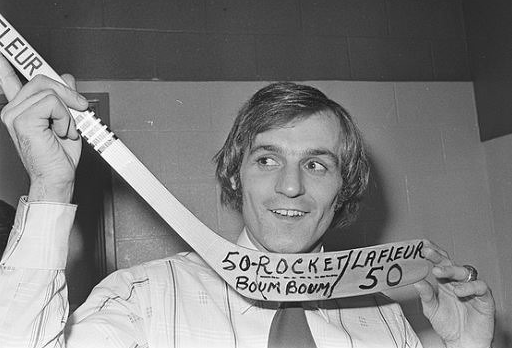 It was March 29 1975, towards the end of his breakout season, that Lafleur became the third Montreal Canadiens player (and eleventh NHL player) to score 50 goals in a season. Among Habs, Maurice Rocket Richard had set the standard thirty years before in 1945 with his famous 50 in 50 and Boom Boom Geoffrion equalled that total in 1961.

Lafleur’s goal came in the first period of a Saturday night game at the Montreal Forum in which the Habs defeated the expansion Kansas City Scouts 4-1. Taking a pass from his centreman Pete Mahovlich, Lafleur fired a wrist shot past goaltender Denis Herron while teammate Steve Shutt was tied up with a defenseman in front. As the puck went into the net, the fans erupted and gave Lafleur a standing ovation and threw debris on the ice which delayed the game for a few minutes.

By this point and peak in his young career, the 23-year-old right winger finally became the spectacular superstar everybody was expecting he would become since he was drafted first overall in 1971. The 50-goal mark was an exclamation mark to a great season. Lafleur had already made team history three weeks before in a March 7 game at the Forum against the Washington Capitals by becoming the first Canadiens player to record 100 points in a season. That game had been Lafleur’s first game back after missing ten games due to a broken finger and he registered four points (2 goals, 2 assists) to reach the 100 point plateau (his linemate Mahovlich reached the mark two games later).