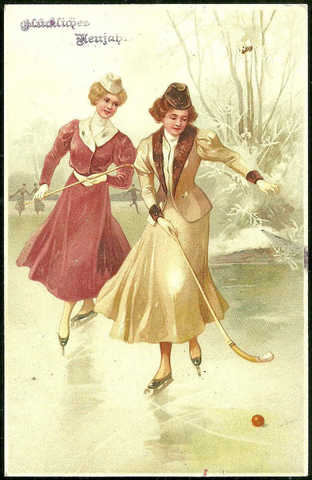 Meissner & Buch Postcards
This firm began in 1861 when Julius August Meissner partnered with August Buch to take over the lithography business of C.L. Bartsch & Co. that had been established in 1852. Meissner’s son, Julius Fredrich joined the firm two years later and became a partner in 1866 when his father died. He became sole proprietor after Buch left, and took many steps to modernize the company during the 1870’s. In 1885 he opened an office in London and later expanded to Berlin, Italy, France, Belgium, and New York. They were now primarily in the business of exporting Christmas cards but in 1888 they also entered the art publishing business. Their art posters and prints seem to have been sold from the Anderson Nexo Print Shop. They would print their first postcard around 1897. They became known for their high quality postcards of women, children, greetings, and views and they fetched higher prices than most cards. They became a major producer of postcards up until World War One. His two sons would join the firm, Julius Wilhelm in 1900 and Wilhelm Curt in 1909.

While Meissner & Buch had been known for their art cards in chromolithography and collotype that were oriented toward the export market, they focused in on local commercial printing after 1918 and began using tinted halftones and offset printing techniques. They did however continue to print some greetings and art reproductions, and even in the 1930’s when they ran into financial difficulties they were still promoting themselves as artistic commercial printers. By 1939 there were no longer any family members running the firm. In 1972 the East German government took over management, and it was later sold off piecemeal in the 1980’s after German reunification.