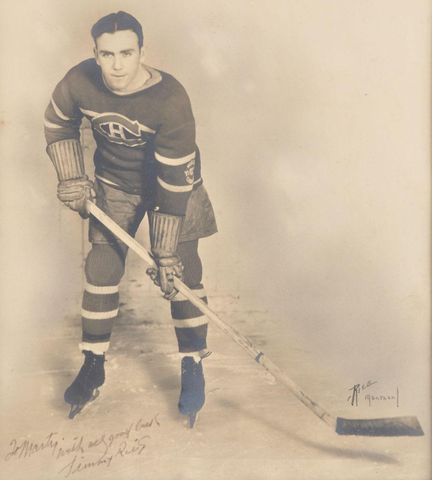 Martin Alphonsos Burke (January 28, 1905 in Toronto, Ontario – March 7, 1968) was a defenceman in the National Hockey League for the Montreal Canadiens, Pittsburgh Pirates and Chicago Black Hawks.

The Toronto native played with the St. Mary's junior and senior squads before spending two years with the Stratford Indians of the OHA senior league. After playing the 1926-27 season with the Port Arthur Ports, Burke joined the Montreal Canadiens for eleven games then was loaned to the Pittsburgh Pirates for the remainder of the schedule. He returned to Montreal the next year and remained a member of their defensive brigade for nearly five years.

Burke was on two Stanley Cup championship teams in 1930 and 1931 with Montreal.

Following a trade, Burke spent the last 16 games of the schedule on the Ottawa Senators before returning to Montreal for the 1933-34 season.

On October 3, 1934 he was part of a major trade that saw Lorne Chabot and Howie Morenz join him in Chicago in return for Lionel Conacher, Roger Jenkins, and Leroy Goldsworthy. Burke spent over three years solidifying the Hawks defense then returned to the Canadiens early in the 1937-38 season.
Burke retired that spring then spent a year coaching the senior Saskatoon Quakers.