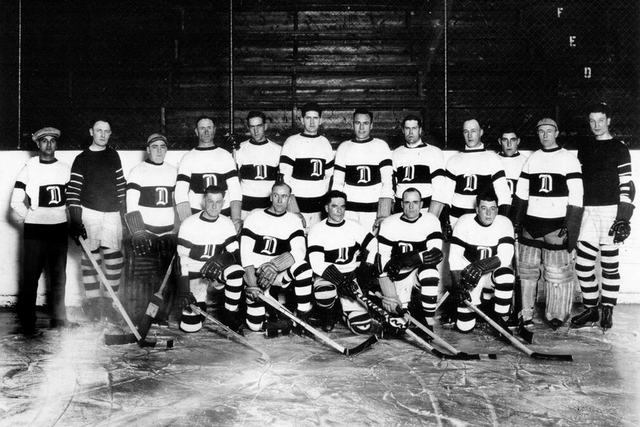 The Victoria Cougars were purchased on September 25, 1926 by a group of 26 investors led by Charles Hughes who moved them to Detroit for their 1st NHL season. However, an arena (Olympia Stadium) was not ready for the Cougars and they played their first season in the nearby town of Windsor, Ontario.

On November 18, 1926 the Detroit Cougars played their first NHL game losing to the Boston Bruins 2-0 at Windsor's Border Cities Arena.

Haldor "Slim" Halderson scored the 1st NHL goal in franchise history vs Roy Worters of the Pittsburgh Pirates at 19:54 of the 3rd period on November 20, 1926 in a 4-1 Pittsburgh win at Duquesne Gardens.

Hap Holmes recorded the 1st NHL shutout for the franchise on November 30, 1926 vs Montreal Maroons at the Montreal Forum in a 4-0 win.

That first year playing without a true home the Cougars would struggle finishing last in the American Division with a 12-28-4 record.

The Cougars total of 28 points is the lowest total points for a season in the Detroit Red Wings' franchise history.