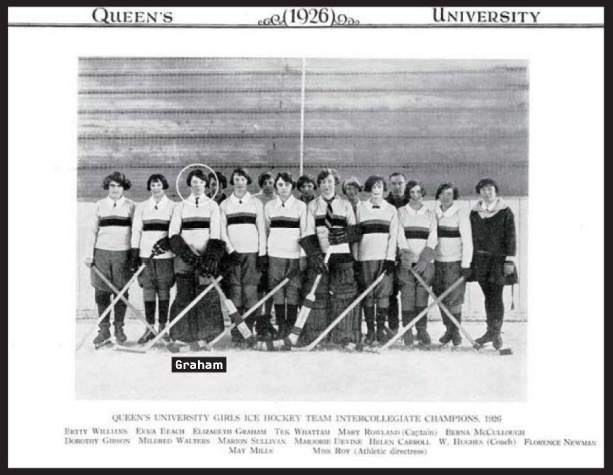 Elizabeth Graham was the 1st goaltender recorded to wear a mask in a Ice Hockey game on February 7, 1927.

The Montreal Daily Star reported : "The Queen's goaler gave the fans a surprise when she stepped into the nets and then donned a fencing mask. It was safety-first with her and even at that she can't be blamed for her precautionary methods."

She wore the fencing mask to protect her teeth. Her father had already spent so much to send her to university that she didn't want to add to his burden by racking up dental bills.

The first photo recorded instance of a mask being worn in a Hockey game by a goaltender came in the late-1920s. There is some debate as to who was first, but we’ll start with the first instance as recorded by the Hockey Hall of Fame. The Hall features an unidentified North American goaltender protecting the net in Switzerland wearing a baseball catcher’s mask. However, there is recorded information from 1927 of Elizabeth Graham donning a fencer’s mask in a game for Queen’s University. As to which was first, there is no certainty, but the late-1920s was definitely the first era to have goalies were primitive masks.