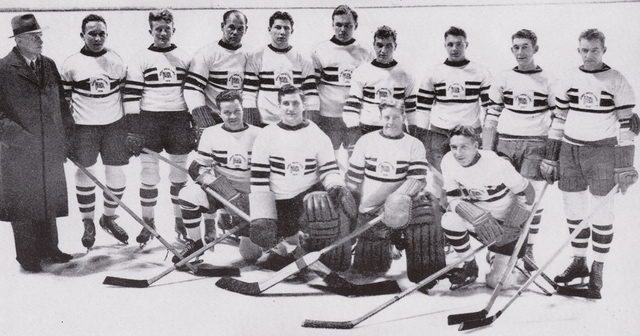 At the 1936 Winter Olympics, in Garmisch-Partenkirchen, Great Britain pulled off a what was seen as a major upset when they won the men's ice Hockey competition. Previously, the British team had finished third (1924), and fourth (1928) but with teams that were, "largely composed of Canadian Army officers and university graduates living in the U.K." It was decided that their team must be British-born this time, and while only one player on the team was born in Canada, nine of the thirteen players on the roster grew up in Canada, and eleven had played previously in Canada.

The tournament itself featured very close play for the medals. It was played in three rounds beginning with four groups, where the two best teams moved on to two groups of four, where again the two best moved on to a final round robin group of four, to determine the medals. In the first round the Italians pulled off the biggest upset of the tournament, beating the USA two to one. While that result had no real impact on the tournament, when Edgar Brenchley scored late in the third to defeat Canada two to one, history was made. The common practise for outdoor tournaments was to have results carried forward, so when the British team shocked the Canadians by defeating them in the semi-finals, that result also counted in the final round. The British team then tied Germany, advancing to the finals, where they proceeded to beat Czechoslovakia. The American and British teams played six scoreless periods before the game was called a tie, ensuring, at the very least, that Great Britain would get silver, if not gold. The Canadians, unable to replay the Brits, could only hope for a silver if they beat the USA. The American team could still achieve gold in a variety of tie-breaking scenarios, but were very tired from the marathon scoreless tie, and lost one to nothing. With that result the British team clinched history, the first team in Hockey history to win the Olympic, World, and European Championships.

A problem the Great Britain team faced was what to do about the Nazi salute.
The team took a vote and decided to give the salute but only on the understanding that they were saluting the German people as hosts of the Winter Olympics. They saluted Hitler’s side of the stadium, then the other side of the stadium. This was hugely popular with the German crowds.