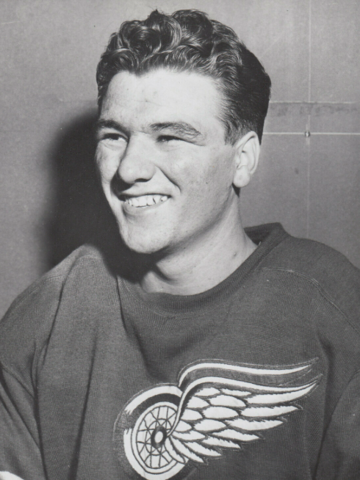 Ullman began ice skating at age 8 at a local rink on the American Air Force base in Edmonton, and within a few years began organized Hockey.

Ullman was 16 when he started playing with the Edmonton Oil Kings, and led the West Coast Junior Hockey League in scoring with 76 points in the 1952-53 season. The next year, he scored an astounding 101 points. Ullman won the scoring championship both years he played junior.

Ullman started his pro Hockey career at age 18 with the Edmonton Flyers of the Western Hockey League, and scored 59 points that first year.

The Detroit Red Wings had owned the rights to Ullman, and help shape his early career in Edmonton, and felt he was ready to join the big club for the start of the 1955-56 season. That 1st season Ullman scored 9 goals and 9 assists as the Red Wings slowly worked him into their lineup.

The next season the Red Wings put Ullman on a line with Gordie Howe and Ted Lindsay, where he scored 16 goals and 36 assists.

Over the next handful of Hockey seasons in Detroit, Ullman was very consistent on his goal scoring and assists, but then exploded in 1964-65, leading the NHL with 42 goals and finishing second to Stan Mikita of the Black Hawks in the Art Ross scoring race. That season, Ullman was selected for the NHL's First All-Star Team. In 1966-67, the third of three consecutive seasons in which Norm finished top ten in regular season scoring, Ullman was voted to the Second All-Star Team.

Partway through his thirteenth season as a Red Wing, the Hockey world was rocked when Norm Ullman was part of a blockbuster trade involving Detroit and the Toronto Maple Leafs. Ullman, Paul Henderson Floyd Smith and Doug Barrie were shipped to Toronto in exchange for Frank Mahovlich, Pete Stemkowski, Garry Unger and the rights to Carl Brewer. Punch Imlach thought a lot of Ullman and insisted that he be in on the trade with Mahovlich and said he wouldn't make the deal without him.

Ullman finished top ten scoring again in 1967-68 playing with Ron Ellis with Paul Henderson, and finally Ullman produced 85 points, Henderson 60 and Ellis 53 in 1970-71. But the tide turned — and very suddenly. "I just couldn't understand what happened," Ullman admitted forlornly. "The second last year I played in Toronto (1973-74), I was fifth in the NHL in scoring at the All-Star break and had the second most votes to (Phil) Esposito for centremen for the All-Star Game. I played in the game in Chicago that year. Then the rest of the year, I hardly got on the ice. And it was the same the whole following year."

A disappointed Ullman jumped at the chance to join the Edmonton Oilers of the World Hockey Association in 1975-76. "The reason I went there was because I was from Edmonton. They wanted me so I thought, 'It might be nice to go back and finish my career where it all started.' So I went there and had a really good time. It seemed to be a little more relaxing than playing in the National Hockey League. The calibre wasn't up to the NHL but it was pretty good Hockey and they had a fair number of players that moved into the NHL. It was a pretty good league. Winnipeg had a powerhouse. So did Houston. Those teams could have made the playoffs if they had been in the National Hockey League. I enjoyed myself there. It was nice to finish there."

Ullman played 1,410 NHL games over twenty seasons, and collected 490 goals, 739 assists and 1,229 points. He participated in eleven All-Star Games. He had sixteen NHL seasons of 20 or more goals, and scored 30 goals and added 53 assists during Stanley Cup Playoff action in 106 games played. Ullman was twice the playoff scoring leader.

Norm Ullman was inducted into the Hockey Hall of Fame on September 8, 1982.