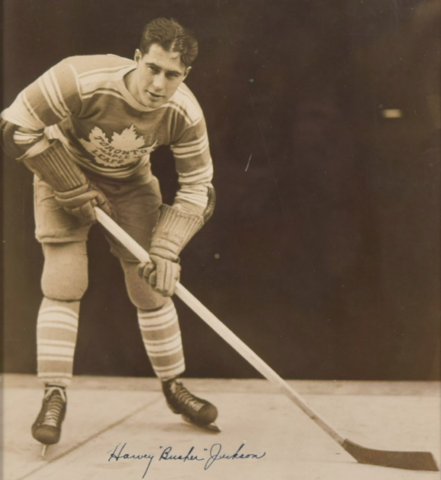 Jackson played his youth Hockey at "Poverty Pond" in Toronto's east side before playing at the Ravina Rink where he was discovered by Frank Selke, the assistant general manager of the Toronto Maple Leafs. Selke signed Jackson to a contract and assigned him to the Toronto Marlboros in the Ontario Hockey Association junior league for the 1927–28 season. Selke was also the coach of the Marlboros. Jackson played for the Marlboros for 2 seasons, leading them to the 1929 Memorial Cup championship, where he scored 15 goals, 10 assists in 13 tournament games, including 2 overtime goals in game 1 of the championship final series.

Jackson became the youngest player in the National Hockey League / NHL when he debuted for the Toronto Maple Leafs in 1929, and played in 32 games for the Maple Leafs that season, scoring 12 goals, 6 assists. During his first season, Jackson was placed on a line with two other young players. Charlie Conacher, a teammate of his with the Marlboros, played right wing and Joe Primeau was their centre. The trio formed what became known as the "Kid Line", one of the early NHL's most famous scoring trios. Primeau was the playmaker whose passes set up both Conacher and Jackson's goal-scoring ability.

Busher got his nickname when he was injured and the team's trainer, Tim Daly, asked him to carry sticks, as was the tradition. "I'm not here to carry sticks. I'm here to play hockey," replied Jackson. "You ain't nothing but a fresh busher!" Daly retorted. The name, which could be mistaken to mean he was from the bush leagues or the back woods, and in this case was a term for someone who had just been called up from the minors. The name stuck for the rest of Jackson's life.

Following a 18 goal, 13 assist season in 1930–31, Jackson led the NHL in scoring with 28 goals, 15 assists in 1931–32. At 21 years, 3 months old, Jackson became the youngest scoring champion in NHL history, a record he would hold until broken by Wayne Gretzky in 1980–81. Jackson's 28 goals that season was the most he would score in his career, and he was named to the NHL's First All-Star Team for the first time of his career.

Jackson scored five goals in the 1932 playoffs. In the Stanley Cup finals vs the New York Rangers, Jackson became the first NHLer to score a hat trick in one period during a playoff game on April 5, 1932, and also assisted on a goal by Red Horner in the 3rd period. Jackson scored in game 2 and added another assist. In game 3 on April 9th at Maple Leaf Gardens, Jackson scored in the 2nd period as the Maple Leafs won the 1932 Stanley Cup championship with 3 straight victories over the Rangers.

The Kid Line remained Toronto's top offensive threat for several years; Jackson, Conacher and Primeau were the team's top three scorers for four consecutive seasons between 1932 and 1935. Following his league-leading season, Jackson led Toronto offensively in 1932–33 with 44 points. On November 20, 1934, Jackson set an NHL record when he became the first player in NHL history to score four goals in a period, notching four markers in the third period of a 5–2 victory over the St. Louis Eagles. The record has not been surpassed through 2017, though twelve players have matched it. He was named to three additional All-Star Teams during this time, placed on the second team in 1932–33 and on the first team in both 1933–34 and 1934–35. Additionally, Jackson played in the Ace Bailey Benefit Game on February 14, 1934. Held in support of injured teammate Ace Bailey, it was the first all-star game in NHL history. Jackson scored two goals for the Maple Leafs in a 7–3 victory over the NHL All-Stars.

A star on the ice, Jackson was hell-bent on being one off it as well. The Kid Line was the toast of Toronto, and the gregarious, good-looking kid who grew up hardscrabble in Toronto’s west end drank it up. He was a man about town, a playboy who never wanted for good times. Hockey’s answer to Babe Ruth. He was larger than life.

Following four consecutive 20-goal seasons, Jackson slipped to 11 goals in 1935–36. The Kid Line was finally broken up. While they remain consistent offensive performers, they lacked defensive ability and opposing teams began to find success playing their own top scoring lines against the trio. Primeau subsequently retired in 1936 in favour of his business interests. Busher then played on a line with his brother, Art Jackson, for one season before joining Syl Apps and Gord Drillon on yet another high-scoring Leaf unit. Jackson scored 21 goals and 40 points in 1936–37 to earn his fourth and final appearance on the First All-Star Team.

Living as hard away from the ice as he played on it, Jackson lived a lifestyle of a Hollywood actor during his playing career, spending money freely, driving fast cars and attending posh parties, and spent most everything he earned. Friends pleaded with him to squirrel away some money. Conn Smythe—one of the NHL’s first and few Titans—even offered to match him dollar for dollar. It never happened.

Prior to the start of the 1937–38 season, Jackson played with the NHL All-Stars in the Howie Morenz Memorial Game, the NHL's second benefit all-star contest. In regular league play, his offence entered a decline as he scored 34 points that season, then 27 in 1938–39. Following the season, Smythe, exasperated by Jackson’s off-ice antics, traded him to the New York Americans along with Jimmy Fowler, Murray Armstrong, Doc Romnes and Buzz Boll in exchange for Sweeney Schriner on May 18, 1939. The five-for-one deal was unprecedented in NHL history at that time.

Prior to his first season in New York, Jackson played in his third benefit all-star game, the Babe Siebert Memorial Game, on October 29, 1939. He represented the NHL All-Stars in a 5–2 victory over the Montreal Canadiens. In NHL play, he posted 12 goals and 20 points for the Americans, then improved to 26 points in 1940–41. He was unable to come to terms with team manager Red Dutton on a new contract for the 1941–42 season however, and did not join the team at the start of the season. The impasse lasted for half the season, until Dutton sold Jackson's rights to the Boston Bruins for $7,500 on January 4, 1942.

Joining the Bruins gave Jackson the opportunity to play alongside his younger brother Art again. He played only 26 games that season due to his holdout, just over half of an NHL season of 48 games, scoring 12 points. Though he played the left wing throughout his career, the Bruins switched him part-time to defence when they lost players to injury or the Second World War. He scored 34 points in 1942–43, and his 19 goals was Jackson's highest total in six seasons. The Bruins reached the 1943 Stanley Cup Final by defeating Montreal, but lost the series to the Detroit Red Wings in four straight games. Jackson's playoff overtime goal on March 25, 1943, at the Forum would turn out to be the last Boston playoff overtime goal in Montreal until 1992. Jackson played a final season in 1943–44, after which he announced his retirement as a player following a 15-year career.

Jackson's lifestyle came crashing down following his retirement as a player as he no longer had the money to fund his pursuits. He unsuccessfully tried to overcome his alcoholism, he burned through two marriages and was charged several times with assaulting or stalking his second wife, eventually convicted of what is now criminal harassment. He borrowed money from friends and twice declared bankruptcy. He ended up broke, alone, homeless and well-known to police. Jackson emerged as one of hockey's tragic figures.

Jackson suffered a series of injuries and ailments in his later years, and he became the focus of a controversy within the Hockey Hall of Fame selection committee. Though he was considered one of Hockey's greatest left wingers, and he was famed for his offensive, attacking style and backhand shot, Jackson's personal problems led Conn Smythe to blacklist him from entry into the Hall. Though Primeau and Conacher had gained induction, Jackson died on June 25, 1966, without being given the same honour. It would be another five years until the remainder of the selection committee finally overruled Smythe and posthumously inducted Jackson into the Hockey Hall of Fame in 1971. Smythe, who was president, quit the committee in protest, while Jackson's son Kim accepted the honour on his father's behalf.

“Busher Jackson was a wife beater,” Smythe said in 1973, two years after Jackson’s Hockey Hall of Fame induction. “He was thrown in and out of jail a dozen times. He didn’t work and never paid for anything.” That was how the Hall’s chairman explained his resignation. Smythe championed “integrity and character” as prerequisites. Jackson was unfit.

Harvey "Busher" Jackson was inducted into Canada's Sports Hall of Fame in 1975.