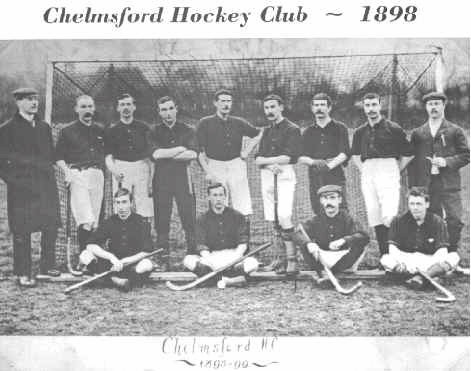 The Chelmsford Hockey Club was formed in 1898 by members of the Grove Lawn Tennis Club and their first ground would have been in the Oaklands Crescent - St Vincent’s Road area. They probably moved and became independent of the tennis club in 1901/02 - The Grove Lawn Tennis Club was founded in 1893 in Grove Road. In 1894 the Club moved to a site in Vicarage Road, where "Wellmeads" stands today. At that time the whole of the Moulsham area was yet to be developed and as well as renting the site for tennis courts, in 1898 permission was granted from the tenant, Mr Herbert Marriage, of Moulsham Lodge, for the use of a "field" behind the courts for a newly formed hockey section of the Club. This hockey section very soon became fairly independent of the Grove as formal correspondence passed between the respective secretaries - At the commencement of the 1898/99 season the hockey section of the Grove Tennis Club was now called Chelmsford Hockey Club, although they continued to rent the pitch, pavilion and equipment from the Grove Tennis Club.